The next two weeks are the “sweet spot” of soybean scouting for sudden death syndrome and soybean cyst nematodes. 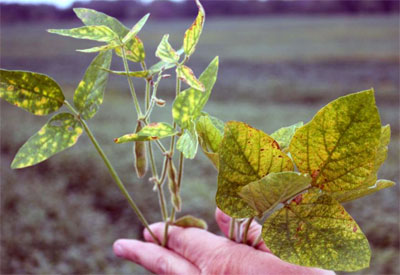 Soybean production has really taken it on the chin during most of the 2012 growing season. Fields have suffered from repeated periods of drought stress, a virtual plague of spider mites, and potentially manganese deficiency if the field is high in organic matter. Despite all of these challenges, it is still possible to watch fields in the two to three weeks before the plants begin to senesce to help identify two of the more serious challenges to soybean production during normal seasons: soybean cyst nematodes and sudden death syndrome.

Sudden death syndrome (SDS) is caused by the fungal pathogenFusarium virguliforme. Symptoms on the leaf canopy appear as bright, yellow inter-venial tissue that can start off as relatively small spots on the leaves, coalescing into most of the area between the veins. As the disease advances, the chlorosis gives way to necrosis, creating the distinctive browning of the inter-venial tissue. A second disease, brown stem rot, can cause similar leaf symptoms. If you can split the lower plant stems, brown stem rot discolors the pith a dark-brown color in the stem going towards the root, where with SDS, the lower stem tissue is generally a dull, whitish color.

If you begin examining the roots of plants that have the foliar SDS symptoms, you can quite often find blue-colored spore masses on the root mass later in the season. You will have to let your eyes get accustomed to the spider mite damage. With a little looking, I think you can pick out the brighter colored SDS symptoms from the duller brownish, spider mite damage. 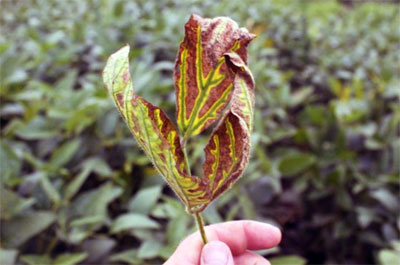 Why do we want to scout for even minor incidences of SDS in soybean fields? The most important reason is to put managing for the disease on your radar screen for that field in future years. Fields that exhibit late-season SDS symptoms can slowly build infection across the field. As incidence builds, fields can start to suffer earlier onset of symptoms. Michigan State University’s research on a heavily SDS-infected field near Decatur, Mich., has shown that there are major differences between commercially available varieties ability to resist early disease development. These differences can lead to substantial yield improvements (30 bu-plus in the worst cases) for the more resistant varieties. Since many of the companies are testing their most resistant varieties at this site (as well as others across the Midwest), you should be able to select varieties that have demonstrated some resistance to SDS as you rotate back to soybeans in the future.

If you investigate brighter yellow spots that appear in fields before the fields begin to turn, it should be possible to detect SDS in your soybean fields. Often, severely infected leaves develop a “crispy,” yellowish-brown appearance. The good news is that you can scout from your pickup initially. You probably will want to get out and walk the field if you think you are seeing SDS. 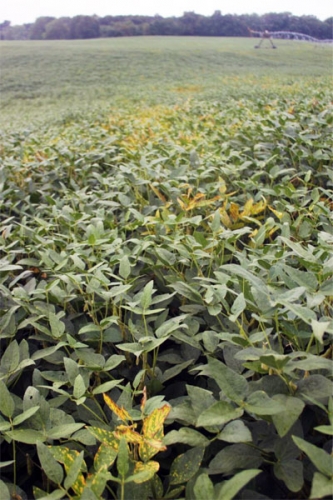 Heavy infestations of soybean cyst nematodes often cause pockets of early leaf drop in fields. Look for areas in fields that “turn” about one to two weeks early and then drop their leaves before the rest of the field. Spider mites have caused some of this type of damage early, but areas of the fields that are changing at this point in the season are worth investigating. You can examine roots for signs of cysts.

Late-season scouting for these challenges can help you make better management decisions and avoid costly losses from these pests in the future.