Watch for grub problems in home lawns this fall

The dry weather we had in August was not good for Japanese beetle grubs, but is just wonderful for European chafer grubs, and European chafer is our most important lawn pest in Michigan.  European chafer can now be found just about everywhere in Michigan south of a line from Muskegon to Bay City, and in many isolated locations north of that line, including Traverse City and Alpena.  Watch for patches of your lawn that stop growing and wilt, or turn off-color in September or October, especially during periods of dry weather when the soil is very dry. Also watch for flocks of starlings on your lawn or patches of turf that have been dug-up by raccoons or skunks feeding on the grubs.  Right now is a good time to check because the dry weather in August has stressed lawns in many parts of the state.  Even though we have had rain the last couple days, you will still be able to see where your lawn was the most stressed.  Turf infested with grubs will not grow as fast and may turn brown and die in patches because the grubs are eating turf roots, making the turf more susceptible to drought.   European chafer grubs are only about a half inch-long right now, but if you have enough of them they can still damage drought-stressed turf at this time.  The amount of feeding injury from European chafer grubs will increase in September and October as the grubs grow larger and consume more turf roots.  The peak time for grub feeding damage is usually in October, but you will see the damage any time in September or October when the soil is dry.  Moist soil will mask turf injury by grubs until the soil dries.  If you find grubs in your lawn you can use the following guidelines to predict if they will damage your lawn:

Lawns with more than five grubs per square foot can be treated with insecticide and irrigated to prevent turf injury.   In the fall lawns canbe treated with Sevin (carbaryl) or Dylox (trichlorfon).  The insecticides are usually applied with a fertilizer spreader, and must be watered-in by rain or a half-inch of irrigation.  You can tell how much irrigation water or rain is received by putting out coffee mugs at several different places in your lawn and checking to see how much water is in them (a half inch in the bottom of the mug is a half-inch of irrigation).  Irrigating grub-infested lawns helps the turf to grow new roots and recover from the turf injury. 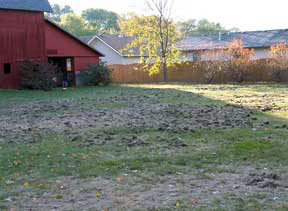 European chafer grub infestation and skunk
damage to a Lansing lawn in 2002. 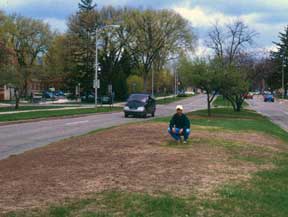