Watch for Phytophthora on vine crops

Rain favors the spread of this disease.

Phytophthora capsici causes a rot or blight of the roots, crowns, stems, leaves and fruit of summer squash, zucchini, hard squash, melons, and pumpkins. Plants may appear wilted initially and recover in the evenings, but eventually the plants will die. Also, following a rainstorm or overhead irrigation, soil containing the pathogen can splash onto the plant’s petioles, causing a blighting near or just above the plant’s crown. Sometimes, the infected plant surfaces can be coated with white Phytophthora spores that can look similar to powdered sugar. It can be especially easy to find the powdered sugar symptoms on the infected fruit.

Once the fruit become infected with Phytophthora, it becomes compromised and can become infected by other pathogens that may be secondary such as Pythium. When this happens, there will be a fluffy white appearance to the fruit that will grow over the white powdered sugar symptom that occurred first, making it hard to tell which pathogen is really at fault. Eventually, the infected fruit will rot, but the pathogen structures that developed inside the diseased fruit will remain viable and serve to further infest the field soil, causing increased problems in future years. 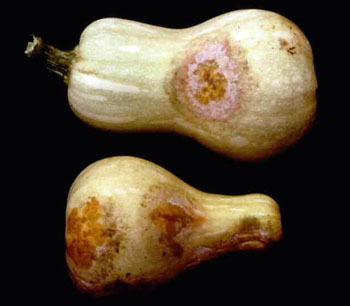 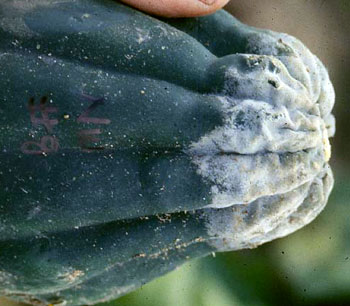 Summary of recommended management strategies for P. capsici on pumpkins and vine crops:

Water management is an important component of managing Phytophthora. Hard squashes, pumpkins, and other types of vine crops can be planted into raised beds which allow for excess water to move away from the susceptible root and crown area. This strategy has proven to be very helpful for pepper production, but becomes more challenging to produce vine crops in this manner. Choosing varieties with more of a bush-like habit versus a trailing vine habit may be helpful for use in conjunction with the raised plant bed system. Because the disease can spread through water, it is essential that fields are well-drained and that low-lying areas of the field are left unplanted.

Overhead irrigation should be sparse and drip irrigation is recommended by Michigan State University Extension. Irrigation water should not be drawn from a surface water source as it may be infested with Phytophthora spores. Widespread studies conducted in Michigan have clearly shown that many sources of surface water are contaminated with this long-lasting, devastating pathogen. As a result, progressive growers have moved away from using surface water for irrigation and use only well water to irrigate their crops. While drilling wells is expensive, spreading Phytophthora capsici over susceptible crops and introducing it to clean fields also has very expensive ramifications.

If Phytophthora is recognized and diagnosed in the field during production, remove the diseased plants and the surrounding healthy-looking border plants immediately. Growers who have successfully managed this disease have seen benefits to plowing under the portions of their fields with Phytophthora including a buffer of healthy plants to create a “firewall” between the problem area and the rest of their healthy crop. Make sure to clean any equipment used in the field to prevent spread to other areas, and discard the infected fruits in an area where crops are not going to be grown. Power washing equipment to remove soil particles and plant debris will be helpful in limiting the movement of Phytophthora from problem fields to clean fields.

If you do not have a history of Phytophthora capsici in your fields, do everything you can to prevent it from occurring. If Phytophthora capsici is present in a field, scout often for disease, rotate only with non-susceptible crop hosts, and irrigate conservatively from a well. Alternate among fungicides to decrease the likelihood of the pathogen becoming resistant.

1 NC = Not classified.
2 Classified by EPA as a biopesticide.

For most crops, applying fungicides for control of Phytophthora through trickle irrigation (if allowed per product label) is helpful to protect the plants, but foliar applications will be needed later as the fruit develop, especially if the fruit lay on the soil surface in possible contact with the pathogen. Many hard squash and pumpkin plants produce large, dense canopies and proper application equipment is usually required to achieve adequate protection of the fruit. Air-assisted nozzles can help to push the fungicide through the canopy more effectively than conventional nozzles. Several fungicides are registered for use on hard squash and pumpkin. In Michigan, some growing areas have fields with Phytophthora capsici isolates that are insensitive to the fungicide mefenoxam (Ridomil Gold, Ultra Flourish).

Evaluation of biopesticides for control of Phytophthora crown, fruit and root rot of squash, alone or in combination with Presidio

This study was conducted at the Southwest Michigan Research and Extension Center (SWMREC) located in Berrien County, Michigan on a sandy soil. Raised plant beds were constructed on June 10 using a RainFlo 2600 plastic-mulch layer. The beds were 6 inches tall and 24 inches wide at the top and were spaced 5.5 feet apart on row centers. The beds were covered with 1.25-mil low density polyethylene (LDPE) mulch and a single drip tape (0.65 gpm per 100 feet) was installed for plot irrigation. The treatments were arranged in a randomized complete block design with four replicates across eight rows that were 100 feet long. Each treatment replicate was a single row 20 feet long with a 5-foot buffer zone between replicates. Planting holes were made every 18 inches (14 holes per plot) and ‘Cougar’ squash seeds were sown on July 9.

Treatments were applied as a drench at the time of sowing on July 9 and repeated at 14-day intervals on July 26, 6 and Aug. 20 to the emerged seedlings. Product drenches were made by applying the treatment solution to the planting hole after transplanting at a rate of 3 fluid ounces per hole using a single-nozzle boom equipped with an 8010LP nozzle operated at 13 psi at the boom. Plants in each replicate were inoculated by placing 2 g of Phytophthora capsici-infested millet in the soil 1 inch from the plant stem on July 9. Data were analyzed using Sigma Stat version 3.1 (Systat Software Inc.) and treatments were compared using the Fisher LSD multiple comparison test.

All treatments significantly reduced plant death and increased yield compared to the untreated inoculated control plants (Fig. 1). Actinovate alone did not limit plant death as effectively as other biopesticide treatments of Bio-Tam and Serenade Soil, although yield was not affected. Alternating the biopesticides with Presidio improved the level of disease control for all the biopesticides and increased the total yields of Actinovate and Serenade Soil based programs. 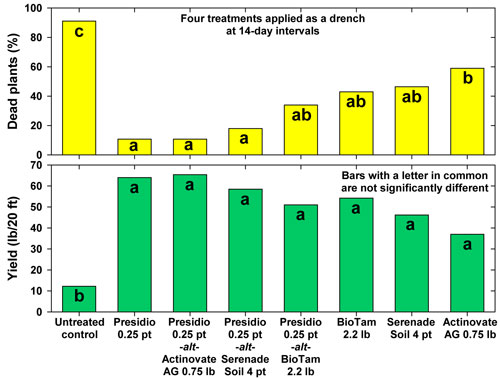 After transplanting, the first fungicide in the drip alternation sequence was applied using a backpack sprayer equipped with a TeeJet 8002 flat fan nozzled hand wand and calibrated to 30 GPA. The application was made as a soil drench directed to the crown-soil interface on June 19. All other applications were made with CO2 pressurized canisters applied using labeled rates via drip irrigation on June 27; July 1, 8, 15, 22 and 29; and Aug. 4, 12, 19 and 26. Five days after the first treatment application, the plants were inoculated with P. capsici-infested millet (100 g sterilized millet, 72 ml distilled water, 0.08 g asparagine). Data were analyzed using SAS Proc Mixed and statistical differences were compared using the Student-Newman-Keuls procedure.

‘Table Ace’ and ‘Chieftain’ treated with the three Presidio fungicide programs had lower plant death at harvest than the inoculated control (Fig. 2). Yield differences among treatments were not statistically significant for ‘Chieftain,’ except the uninoculated control compared with the Serenade 14-day treatment. The conventional fungicide programs resulted in lower disease incidence than the biological programs, and higher yields. However, in our study it appeared that ‘Chieftain’ is less susceptible to P. capsici than ‘Table Ace’ and may be useful in an organic production system that relies on biological control products. 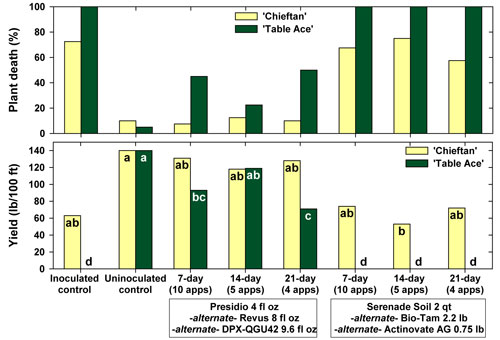 This research was supported by funding provided by the Michigan Vegetable Council.