Stop those epidemics now to keep your plants and profits healthy.

Powdery mildew is a major foliar disease of cucurbits, easy to identify because of the whitish, talcum-like, powdery growth. It develops first on close-set plants on the shaded lower leaves and can infect leaf surfaces, petioles and stems. Infected leaves usually wither and die. Premature loss of foliage often reduces the size or number of fruit and the length of the harvest period. The fungus can multiply and spread quickly under favorable conditions, because the length of time between infection and appearance of symptoms is usually only three to seven days. A large number of spores that can infect healthy tissue can be produced in a relatively short time. Spores may be transported rapidly over long distances by air currents.

Market quality of the fruit can be reduced because of sunburn and premature or incomplete ripening, resulting in poor flavor or rind color (pumpkin). In addition, powdery mildew infection predisposes plants to other diseases that may impact the pumpkin handle making it weak and brittle. Resistant cultivars represent an important step forward in managing powdery mildew and are commercially available only for cucumber, cantaloupe, and some pumpkins (see list below).

Pumpkin cultivars described as being resistant or tolerant to powdery mildew:

Note: Control products may still be needed in conjunction with using these cultivars to ensure a high level of powdery mildew management. However, the number of applications required will likely be reduced when growing a powdery mildew resistant/tolerant cultivar compared with growing a more susceptible cultivar. 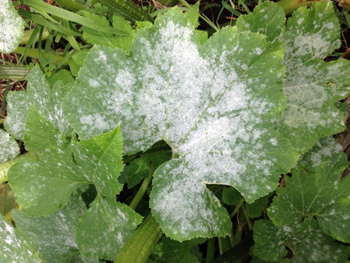 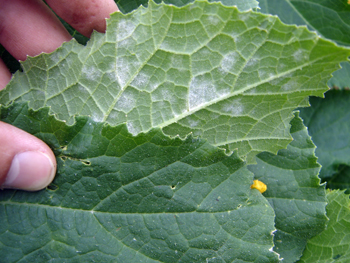 Powdery mildew on pumpkin leaves (left) and on underside of leaf (right).

Currently, fungicides (see table below) in combination with resistant cultivars are the primary control practice for this disease. Registered products vary widely in their ability to limit the powdery mildew pathogen. Some fungicides could be suitable for use in organic growing systems, but may need to be applied early in the production cycle to ensure that the pathogen doesn’t become established prior to beginning a protection program; control products will need to be reapplied frequently. Other products suitable for sustainable or conventional production are fairly new to the market and offer a high level of control that will be very useful since the powdery mildew pathogen is well-known for developing resistance to older control products that have been used over the years.

When choosing fungicides, it is especially important to alternate among products that attack the pathogen in different ways. In the table below, the FRAC code can be used as a guide to know whether the products act similarly (FRAC numbers are the same) or differently (FRAC numbers are different). Another point to consider is that there are no “magic bullet” products that can halt a well-established problem or a powdery mildew epidemic.

Products registered for use on powdery mildew of vine crops

1Not labeled for squash or pumpkins.
2NC = Not classified.
3Not labeled for pumpkins.
4Labeled for watermelon only.
NOTE: This information is a guide only and is not intended to replace the specific product labels. Always read the label and follow all instructions closely. Inclusion of a product in this table does not mean that it is recommended for use, but rather indicates that it could be used according to current label interpretations. Also be advised that states may differ in their registration of these products so do your homework before putting together a fungicide strategy.

Many years ago, it seemed that the first occurrence of powdery mildew on pumpkins did not occur until early August. However, in more recent years, the first powdery mildew reports on Michigan vine crops are usually made around the July 4 holiday. That can mean that growers are faced with a relatively long period where control products may be needed. According to Michigan State University Extension, scouting fields beginning in June and carefully looking at older leaves that may be shaded and remembering to check the undersides of the leaves for powdery mildew colonies is important. Knowing when the pathogen first comes into a production field is important so that a management strategy can be put into place before the problem is out of control.

Regardless of the type of product that fits into your specific operation, managing the disease early will be more successful than waiting until a crisis and then trying to protect the crop. Even if only a specific number of sprays fit within the control budget, it is best to spend those spray dollars earlier when they can do the most good rather than waiting until the powdery mildew pathogen is past the point of control because the sprays are unlikely to offer much help at that point.