MSU researchers in collaboration with PanAmerican Seed have developed a spreadsheet to help greenhouse growers predict the effect of temperature on flowering time of 15 varieties of Wave petunia.

Petunia is among the most commonly grown bedding plants and thus has been the subject of intensive breeding efforts. Wave® is one of the most popular series of petunias, but crop timing information has been limited. With colleagues Tasneem Vaid, Cathy Whitman, Heather Greyerbiehl and Mike Olrich of Michigan State University’s Department of Horticulture, as well as Sonali Padhye of PanAmerican Seed, we performed experiments to quantify the effects of temperature and photosynthetic daily light integral (DLI) on flowering time and characteristics of 15 Wave petunia cultivars. Our goal was to generate temperature-based flowering time models for more predictable greenhouse scheduling.

Based on controlled greenhouse research experiments at MSU, we developed mathematical models that predict flowering times at average daily temperatures of 54 to 75 degrees Fahrenheit. Those equations were then incorporated into a Microsoft Excel program that allows a user to enter two temperatures to estimate time to flower (Figure 1). In addition, the program predicts the effect of changing the DLI between 5 and 14 mol·m-2·d-1 on flowering time. Flowering times are from transplant of a 288-cell plug grown under long days and assumes plants are finished under long days. The program can be downloaded free at the MSU Floriculture webpage and on the PanAmerican Seed webpage. 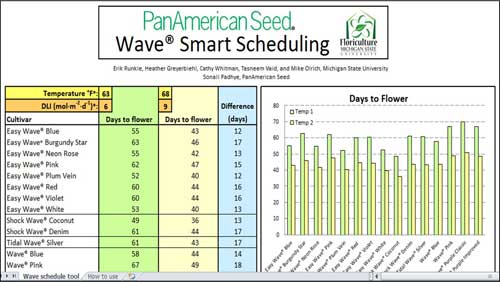 Examples of the crop predictions for three varieties are shown in Table 1. As you can see, increasing temperature, increasing the DLI, or both, accelerate flowering, but the values depend on the specific variety. We hope this tool can be used by growers to improve the predictability of flowering and to predict the consequence or raising or lowering the temperature to accelerate or delay flowering to meet a desired shipping date. Other crop timing tools, including the FlowersOnTime program discussed in the recent Michigan State University Extension article, “Update on Flowers On Time, a free greehounse decision-support tool,” have also been developed. For additional information on the effects of temperature and light on bedding plant production, visit the MSU Floriculture website.

Table 1. Estimated number of days from transplant of 288-cell Wave petunia plugs grown under long days until first flowering. Timing is from the Wave Petunia Smart Scheduling Tool and assumes long days are provided during the finish stage.