After a long winter, spring work has yet to begin in West Central Michigan.

Spring has been slow to arrive in 2014 after a winter season that came early and stayed late and broke many weather records for low temperatures observed around the west central region. In Entrican, Mich., 25 degrees Fahrenheit below 0 low air temperatures were recorded from January through March.

A common question this spring has been, “What effect will the very cold weather have on wheat and alfalfa?” This could also be extended to overwintering insects and pests. The answer is not as easy as one might think. The following graphs show the minimum soil temperature and the minimum air temperature for Entrican and Kent City, Mich. 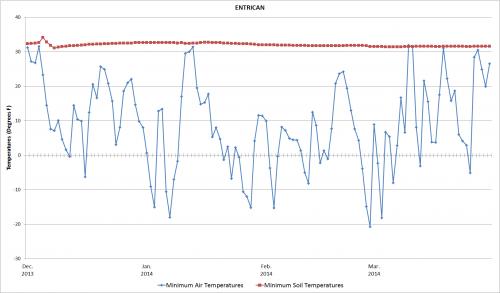 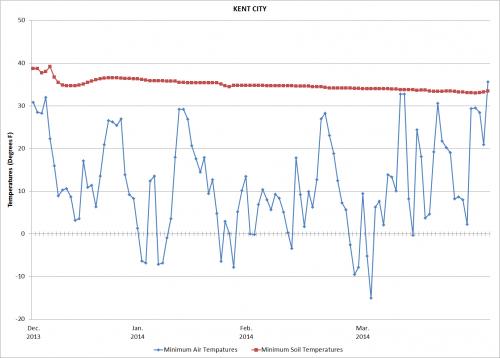 For areas that maintained a thick layer of snow cover, the extreme air temperatures were moderated by the thick snow cover over the relatively warm soils. This explains the very consistent soil temperatures, just below freezing, that were observed at several Michigan State University Enviro-weather stations this winter. For many plants and insects that overwinter at or below the soil surface, this winter was long but not terribly cold in many locations.

There are areas where the frost was and still is very deep in the soil, especially roads and areas where snow was pushed back, blown away or removed.

Virtually no field work is occurring with some fertilizer being spread on a limited basis. There are a few localized areas where soils are still thawing. Snow drifts are still present on the edges of some fields near woodlots. Caution should be taken while spreading fertilizer this spring as soil conditions may change rapidly as you move across the field due to the variation in snow cover amount and timing of melt.

Seasonal weight restrictions remain in place on secondary roads throughout the region, making input deliveries difficult for many suppliers.

There are a few areas where wheat is beginning to break dormancy with new growth present, but many fields have yet to green up.

The 2013 corn crop continues to be harvested as several producers around West Michigan did not get harvest completed last year before getting snowed out. This un-harvested corn is less than 3 percent of the total crop, but still noteworthy.

Is the market telling you to sell or store your grain?

Is available grain storage a concern on your farm?