Cool, wet weather remains with us in Michigan’s west central region. Most areas of the region are reporting 8 inches of rainfall for the previous two-week period. Heavy rainfall over the past two weeks has left soils saturated and low areas of many fields with standing water. In addition, one-half inch of snow was observed on the morning of April 24 in many areas. 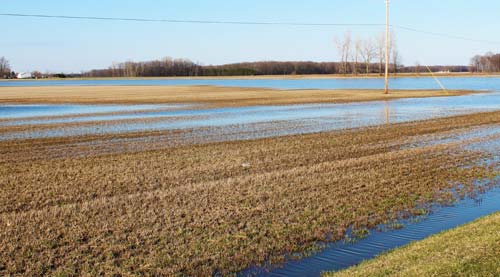 Very limited field work has occurred except for early fertilizer application. Air temperatures have struggled to reach the 60 degree mark with several days recording a high temperature of less than 40. High soil temperatures are in the mid-40s with lows dipping down into the mid-30s.

Wheat is at Feeke’s 4 to 5. Green-up occurred between April 8-11 in most areas. Fields generally came through the winter with little damage; however, significant damage did occur from the recent heavy rainfall events in many fields. Most of the damage is from rill or gully soil erosion as well as drowned out areas.

Alfalfa has broken dormancy. Standing water in low areas has caused stand loss in many fields. Virtually no progress has been made in establishing new seedings. 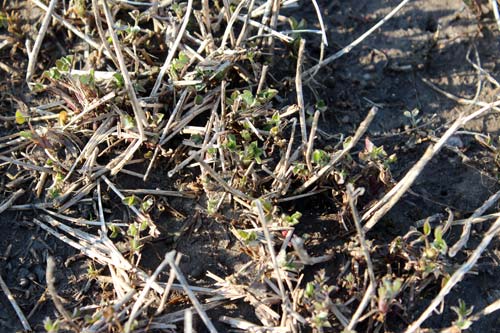 Alfalfa has broken dormancy in much of the region. Photo credit: Fred Springborn, MSU Extension

The extent of the damage to both wheat and alfalfa can be assessed over the next few days as water levels recede and surviving plants begin to more actively grow.

No real progress has been made in planting spring crops; no significant tillage has occurred. No armyworm moths or black cutworm moths were caught in traps this week.

I, as well as my other colleagues with Michigan State University Extension, urge all producers and workers to keep safety in mind when spring arrives and field operations begin.

Other field crop regional reports from this week

Getting Down to the Business of Sustainability