Area fields had adequate moisture until rains Sunday and Monday created some flooding.

Heavy rain was experienced in the Central region this week with many areas receiving 5-6 inches of rain Sunday, July 6 and Monday morning, July 7. This has left fields that were already at adequate moisture levels for plant growth with excessive moisture creating flooding and areas of standing water. 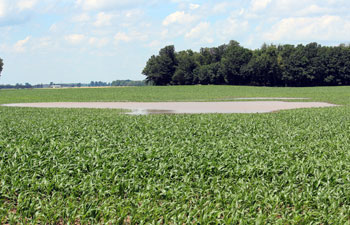 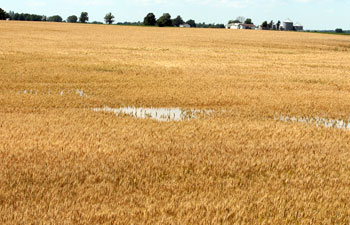 Left, Significant flooding occurred in Gratiot this week as is seen in this corn field, where the corn is at 7 leaf collars (20-24 inch high). Right, wheat field where the water was above the heads in low areas of the field.

Corn is variable. On coarse-textured soils, with or without irrigation, the crop is generally in excellent condition. On poorly drained soils and poorly drained areas of fields, the crop has not fared as well with unplanted areas and drowned-out spots. There is concern over the potential N loss from leaching in coarse-textured soils and from denitrification in fine-textured soils but the level of loss, and the potential impact of those losses, is highly variable. For assistance in assessing your particular situation, contact your local extension educator or your agronomist.

Dry beans remain at 94 percent of intended acres planted; most growers have now put the planters away for the year so we have 100 percent planted of what will be planted. Some additional acreage losses did occur from flooding, however, overall losses due to the recent heavy rains will not be known for another week or more after the effect of saturated soils are fully known. The development of root rot is likely in several areas of the region.

Early planted soybeans are flowering; the majority of the crop is at V3 to V4. Soybean aphids can be found, but numbers are very low. Weed control continues to be the primary concern as new flushes of weeds continue to emerge.

Wheat is nearing maturity but is still more than a week from harvest. Weed issues will be a challenge at harvest as new flushes of weeds have emerged and continue to emerge.

Oats are fully headed with some cereal leaf beetle feeding. Despite late planting, the oat crop appears to be, for the most part, in very good to excellent condition.

Second-cutting alfalfa harvest is underway in several areas of the region with just a few first-cutting fields left. Potato leafhoppers are present and populations should be monitored.

There is still a significant amount of first-cutting mixed hay waiting to be harvested. Much of it is fully mature.