Very limited planting progress in the West Central region for the first full week of May.

Much of the past week has been relatively dry with field work getting underway on the sandy, well-drained soils between Sunday afternoon and Tuesday night, May 4-6. Heavy loam soils remain too wet to work in much of the area. At Entrican, Michigan, air temperatures have ranged from the upper 40s to low 60s for highs with nighttime lows in the mid-30s to low 40s. Low soil temperatures are in the mid- to upper 40s with highs in the low 50s at a 2-inch depth.

Rainfall totals have been variable with most areas receiving 1 inch or more from Tuesday night through Wednesday night, May 6-7. Some thunderstorms were quite intense in the northern portion of the region, particularly Mecosta and Newaygo counties.

Growth stage of wheat is predominantly Feekes 5 with a few fields close to Feekes 6, as the first node is just beginning to elongate, but has not yet risen above the soil surface. Annual weeds are beginning to emerge and winter annuals are actively growing. Growth regulator herbicides should be safe to use for another few days in all fields, after that applicators should begin checking fields before application to confirm growth stage. 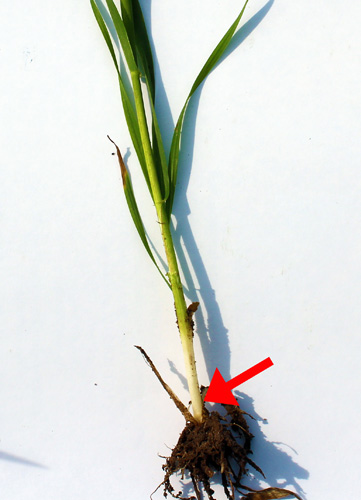 The first node is beginning to elongate, but not yet above the soil surface on early planted wheat. Photo credit: Fred Springborn, MSU Extension

No significant soybean planting has occurred.

A few fields of corn have now been planted, but more than 98 percent of the crop is still in the seed bag waiting for fields to dry out again. There are a few fields of 2013 corn that are still standing, much of this is now on fields that are too wet to access.

Alfalfa is 3-6 inches in height. Like wheat, there are fields with stand issues due to the impact of the winter and spring weather, late cutting last fall, and other issues, but these issues do not appear to be as significant as they are in other parts of Michigan. Like wheat, alfalfa benefited from the thick blanket of snow cover over the winter. I have not found any alfalfa weevil or other significant pest issues.