Blueberries are in bloom with developmental stages going from late pink to early bloom, but extensive winter damage started showing up in most west central Michigan fields.

We are entering a new period of low temperatures and raining conditions that are affecting all small fruit crops. Rain accumulated in the area during the last five days, amounting to 2.69 inches. Daily temperatures over the same period were in the upper 70s with an average daily maximum temperature of 70 degrees Fahrenheit and an average daily minimum temperature of 54 F. Growing degree day (GDD) accumulation in west central Michigan (base 50 F) since March 1 is 220 GDD.

In blueberry development, we are observing the progress of a serious situation resulting from winter damage that occurred at the end of the winter. Winter damage is more intense than previously estimated. However, some varieties were able to escape with moderate damage depending on the location and the nutritional conditions of the field.

Field scouting conducted Monday and Tuesday, May 11-12, in Allegan and Ottawa counties indicated extensive damage in Elliott, Burlington and Jersey fields. In Allegan County, the varieties Elliott and Burlington are the most affected (Photo 1). Jersey fields also show a high degree of damage, but damage is less than in the fore mentioned varieties. Bluecrop escaped with some degree of damage, but in most fields looks better than the rest of the varieties.

In Ottawa County, blueberry fields around West Olive, Michigan, are showing different degrees of damage, but the damage is not as bad as in fields located in Allegan County and other southern places. Here, the most affected variety is Jersey. Although all varieties were damaged at different levels, fields planted with Jersey are showing extensive dieback resulting from the winter damage. Some fields may require complete renovation to allow new growth to replace the affected plant structure (Photo 2). 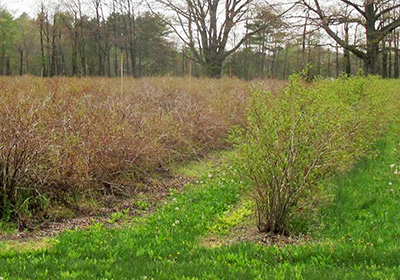 Photo 2. Jersey (left) and Bluecrop (right) side by side showing the difference in response to winter damage at West Olive, Michigan.

Some factors that contributed to magnifying the impact of winter damage were lack of pruning and nutrition. Some fields that were affected in 2014 by winter conditions and damaged canes were not pruned in the hopes that the plants could recover. At this time, those fields look really bad. In some cases, a complete renovation of the field is the best recommendation to speed up the recovery of those plants. For growers with fields with extensive damage, Michigan State University Extension recommends to start looking into your crop insurance.

Regarding blueberries insect pests, cherry fruitworm adults started emerging in Allegan County during the past week. Growers with a history of damage by cherry fruitworms need to be alert and start applying the recommended measures to control this pest and not wait until cranberry fruitworms emerge. Data collected from 2007 to 2009 in selected sites indicted that, on average, cherry fruitworm adults emerge around 238 ± 30 GDD and the egg-laying period starts 432 ± 15 GDD (base 50 F) accumulated after March 1. Accordingly, considering the weather forecast from MSU Enviro-weather for the next six days; we may see the first cherry fruitworm eggs at the end of next week in southern counties.