Apple harvest will begin in about one month – are you prepared?

Typically in July, drier weather becomes the usual pattern, but we have had some unusually high rainfall totals in the last week, with some areas seeing less than 0.5 inch and others having nearly 2.5 inches. Some areas broke records for highest rainfall ever for the day on July 17. While the heavy rainfall areas could reduce trickle irrigation for some sites that had heavy rain, it probably won’t last for long as drier and hotter weather is predicted to return.

We are quickly approaching the 30 days before harvest timing for harvest management applications. Please refer to “Predicted 2016 apple harvest dates” by MSU Extension to help with the proper timing.

Fire blight has stopped progressing for the 2016 season and cover sprays in blocks with blight symptoms can stop. The blight will no longer spread as trees have shut down their growth for the year.

Summer apple diseases include sooty blotch and flyspeck fungi. These diseases require about 240 hours of leaf wetness starting after 2 inches of rain has accumulated on your last fungicide spray. The sooty blotch and flyspeck Enviro-weather model can help you time re-applications if needed based on your last fungicide spray on your farm. With all the heavy rains some areas have had recently, a second summer disease fungicide will most likely be needed sometime prior to harvest. Be sure to watch pre-harvest intervals as you approach harvest dates for early apple varieties.

Surprisingly, powdery mildew has been less of an issue so far in the 2016 season, but it continues to be found a bit more every week. As terminal buds set, the need for mildew fungicides should be lessened.

Codling moth adult flight continues to be very low. A few traps have reported very few, single digit adults, but it’s not a steady increase yet. The start of second generation and a new biofix has not been set. It is likely the very hot weather has delayed adult emergence of codling moth. If you haven’t already, change out lures in monitoring traps to be sure to accurately catch the beginning of second generation codling moth flight. We are in between generations of codling moth right now and cover sprays are not critical unless your numbers are extremely high.

All stages of European red mite are being found. Recent heavy rains should have washed a few mites away, but keep an eye on them for numbers that might need one final cover spray prior to harvest; be sure to watch pre-harvest intervals of miticides. The July threshold is five mites per leaf. Mite populations can grow quickly in hot and dry conditions.

More beneficial mites are also being reported and they are helping to keep some European red mite populations in check. If you must use a summer miticide for pest mites this late in the season, choose one with reduced effects on beneficials. Avoid pyrethroids if you can, as they can be tough on beneficials and reduce them not only for 2016, but also 2017.

Obliquebanded leafroller flight has been over for several weeks and just a few small larvae of the summer generation were found last week. Flight of the overwintering generation could begin at any time with small larvae appearing in mid-August where they will feed on fruit. We are in between generations of obliquebanded leafrollers right now in the Grand Rapids, Michigan, area and cover sprays are less critical.

Apple maggot adult flight began in the Grand Rapids area during July 17-20. Numbers have been creeping higher each year for this pest, so don’t get caught off guard. Traps should be in place in known hotspots and along orchard edges near wooded areas with alternate hosts present. Not all blocks will have issues with apple maggots, so trapping adequately will allow you to spray only where needed. The recent heavy rains will soften the soil, allowing for adults to move out of their overwintering sites more easily, so expect an uptick in fly numbers over the next week or two.

Various aphid species can be found in all tree fruits, and numbers seem to be building now each week. There are syrphid fly larvae, midge larvae and lady bug larvae present in some populations. Several pictures were sent to me this season regarding lady bug pupal cases attached to apples. I have seen this in high numbers in past years, which happened to be very hot summers as well. Perhaps the lady bug numbers are so high that the spaces for pupation sites are limited. Or, maybe they are developing so quickly with warm temperatures that they have to quickly choose a pupation site. This should cause no alarm. 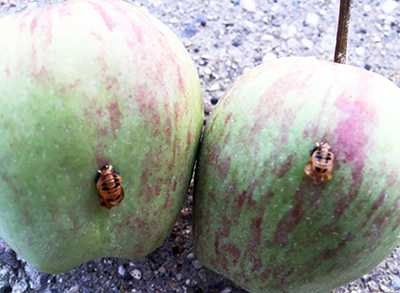 Dogwood borer adult flight continues and is declining. The window for trunk sprays to be effective has passed by.

There have been no reports of brown marmorated stink bug adults or nymphs in the Grand Rapids area, but they are present on other known hotspots in southern Michigan.

Japanese beetles started to be found nearly a month ago, but they sort of left the scene for a week or so and then came back. I’ve noticed a marked increase in their numbers just in the last few days; perhaps the heavy rains got them moving out of overwintering soil sites.