Western bean cutworm numbers will increase over the next few weeks, and Asiatic garden beetles are emerging, with southwest Michigan being the most hard-hit area.

Western bean cutworm moths are flying in southern and central counties. Numbers will pick up over the next few weeks, with peak flight (the target for corn scouting) expected from the last week of July into early August.

Visit the Western Bean Cutworm Trap Network website sponsored by the Canadian Corn Pest Coalition to view trap counts from Ontario and Michigan. On the Interactive Map of Weekly Catches, hit the small clock icon on the upper left corner of the map. This will “play” the trap catches from the start of the season.

Asiatic garden beetles are also emerging this week. Those of you in southwest Michigan will likely see these small, chestnut-colored scarab beetles at lights on warm nights. This beetle is a recent invader into Michigan, Indiana and Ohio over the last 15 years. It is a well-documented turf pest, but not much is known about impact in field crops.

Infestations tend to be in sandy fields or parts of fields, and in corn following soybean or potato. It is still a mystery where and why adults lay eggs in certain fields, but not others. We also lack good information on the impact of tillage, annual weeds and insecticide use on grub numbers, and on yield losses from this critter. 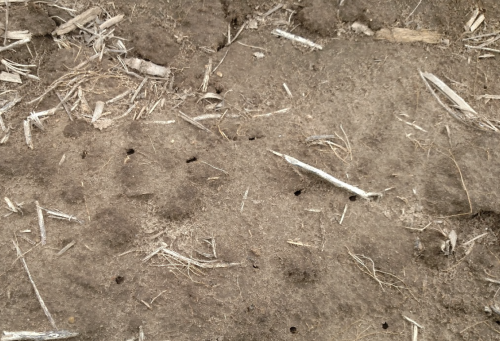 Numerous holes where adult Asiatic garden beetles exited the ground. Note how sandy this field is.

You may have Asiatic garden beetles and not even realize it. Bruce Mackellar, the Michigan State University Extension field crops educator in southwest Michigan, is in the worst-hit area. He has provided a list of Asiatic garden beetle signs in corn fields in his neighborhood.

Colleagues at Ohio State University have noted heavy Asiatic garden beetle grub infestations around marestail plants, and MacKellar found numerous adult beetles near marestail. Some of the plants he pulled up had 50 or more adult beetles hanging out under the soil surface near the roots. 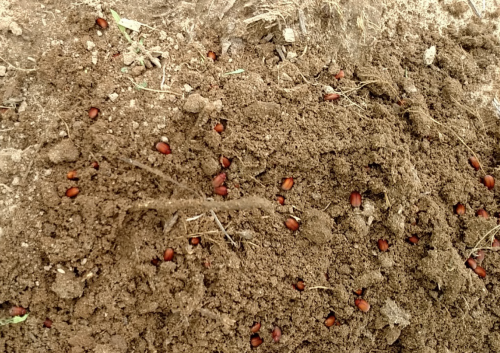 Adult Asiatic garden beetles in the soil where a marestail plant was pulled up. Bruce MacKellar counted 50 under one plant.

Ohio State University and MSU entomologists are teaming up to answer some of the questions about Asiatic garden beetles. If we get funding, we will be able to survey dozens of fields in northern Ohio into southern Michigan, starting next spring.

If you farm or have customers in the southern tier of Michigan counties (Cass, St. Joe, Branch, Hillsdale) and suspect you have had fields infested with Asiatic garden beetles this year or in the past, give me a call at 517-353-5328 or email difonzo@msu.edu with your contact information and location. You can also call Bruce MacKellar at the Van Buren County Extension office at 269-657-8213.

We are accumulating sites now that can be sampled and hopefully provide some feedback on the impact of these grubs on seed and field corn in our states.