What fruit is growing on my potato plants?

Gardeners have been surprised this year to find fruit produced on tops of potato plants. Learn how they are caused and why they are not edible.

Many home gardeners have been shocked to see their potato plants do something they have not seen before: produce fruit on the tops of the plants. These gardeners are familiar with planting the seed potatoes or potato pieces and digging potatoes at the end of the season. Some might have even noticed the small, tomato-like blossoms in July or August, but few people have seen the fruit that look like green cherry tomatoes at the top of the plants. Michigan State University Extension hotlines have received many calls this summer about strange fruit where it doesn’t belong.

Potatoes belong to a small family, the Nightshade or Solanaceous family. The other members are tomatoes, peppers and eggplants. Potatoes resemble tomatoes more than the other family members. Potatoes and tomatoes can share diseases, like this year’s large problem with late blight. For potatoes, this is the disease responsible for the Irish potato famine in the 1840s. They can share insect problems like tomato hornworm that will feed on both potatoes and tomatoes with nondiscriminatory delight. Occasionally, you will see ads in garden magazines for a grafted tomato-potato mix up that produces tomatoes on the top and potatoes in the soil. This expensive grafted plant does not produce a great number of either. It is like a two-headed calf; it is unusual and nobody else has one to show off.

This year’s cool July was responsible for the potato fruit seen across Michigan. Potato flowers and fruit are produced because this is how the plants multiply themselves, by seed. Potato flowers look very much like tomato flowers except instead of being yellow, the potato flowers can be white or lavender or pink. It depends on the type of potato as to the flower color. Most years, July and the beginning of August are hot and sometimes dry months. Those cute little flowers fall off the plants and never have the opportunity to go from flower to fruit. The cool weather with adequate rain allowed the flowers to remain, pollinate and grow into small potato fruit. These look suspiciously like small, round or oblong cherry tomatoes. 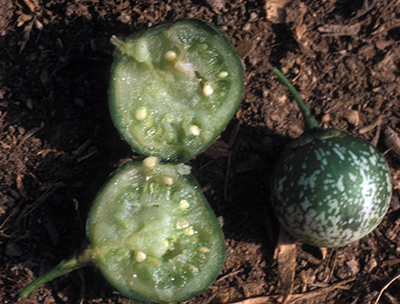 These potato fruit are not edible. More precisely, they are poisonous. They contain high amounts of solanine that can make the eater very ill. Solanine is also found in potatoes that are dug, left in the sun and the skin turns green. Besides being very bitter, eating plant parts containing solanine can lead to headache, abdominal pain, shock and diarrhea. If little kids are around, the fruit should be removed so the children are not tempted to eat them.

If you saved the ripe seeds inside the potato fruit, you would not get the same kind of potatoes as the parent plant. It would take several years to even grow these to a size that you could harvest. The only people saving and planting potato seeds are growers and breeders who are hoping to produce a new variety of potato.

So marvel at the fruit of your potatoes – this is not going to be a yearly event. It is not an evil omen or bad luck. Your potatoes below the soil will be just fine. Just blame it on the weather.