What can I do about Japanese beetles landing on our golfers?

Japanese beetles are flying all over some golf courses this week, making golfers unhappy. This article explains how to reduce the clouds of beetle to a tolerable level, and how to protect fairways from future grub damage. 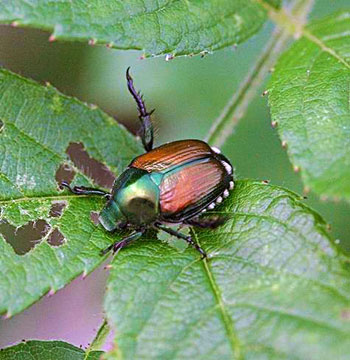 The next four weeks (mid-July to mid-August) will be the busiest for Japanese beetles on the golf course. Because their activity level is temperature dependent, they are the most active on hot sunny days. They will continue to feed on trees and shrubs, and lay eggs through late July and August, but the onslaught will taper in late August, and very few will be left by Oct. 1.

Meanwhile, golf course superintendents are dealing with some unhappy golfers, especially in places where Japanese beetle has recently become a problem and the golfers are not used to them. At first people may think they could bite or sting, or they just do not like bugs of any kind. Golfers should be told two things: that Japanese beetle has recently spread into northern Michigan and that they are completely harmless to people.

Superintendents can minimize the nuisance factor to golfers by spraying tees, greens, and a buffer strip or 20 feet surrounding tees and greens with Sevin (carbaryl), Tempo (cyfluthrin) or Decathlon (cyfluthrin). Any trees or shrubs that beetles are feeding on near tees and greens should also be sprayed. You can also pull most of the beetles away from tees and greens by placing a Japanese beetle trap 100 to 200 feet away from each tee and green. This will attract beetles to the trap and away from the tees and greens. Don’t place the traps too close to tees or greens because they can pull beetles in from as far as an eighth of a mile away. The traps need to be emptied every two to three days by dumping the beetles into a bucket with a few inches of soapy water in it.

Another strategy is to plan ahead for the next year by treating the larval stage of Japanese beetle, C-shaped white grubs, in July to prevent turf damage in the fall and next spring, and to reduce the number of beetles that will emerge next summer. Merit, Arena, Aloft, Meridian, and many new products containing imidacloprid, all work very well when applied in July. This will not help with the beetles that are out now, but it will reduce the number you have next year. As you could probably guess, treating all of the turf on the golf course (wall to wall) has the biggest impact on how many beetles emerge next year.  However, treating just the irrigated turfgrass also has a big impact because the female beetles prefer to lay their eggs in moist soil under turfgrass.

Of greater concern to most superintendents is the turf damage that can be caused by the white grubs feeding on the turf roots in the fairway. Grub damage to fairways appears as patches of thin, yellow or dead turf in late September, October and May. On fairways, more than 5 grubs per square foot can cause a problem. Even worse is the damage caused by skunks or raccoons when they tear-up turf to eat grubs. An application of one of the insecticides listed above, before August 15, will prevent grub, raccoon or skunk damage in the fall and next spring. Be sure to irrigate just before and just after applying an insecticide for grubs with a half to 1 inch of water to move the insecticide into the soil. There is a high correlation of the incidence of insecticide failure to control grubs with failure to irrigate immediately after application.