What to do with current apple powdery mildew infection

Apple powdery mildew is caused by the fungus Podosphaera leucotricha. This fungus grows as a white mass on new terminal growth of trees, eventually enveloping shoot tips. These symptoms can result in loss of vigor and potential effects on return bloom and yield of bearing trees and stunted growth of nonbearing trees. In addition, powdery mildew infection of fruit can cause russeting if the disease is not controlled before fruit are present. The powdery mildew fungus is unique in that it can infect trees in the absence of wetting from rain or dew.

Apple powdery mildew is effectively controlled by sterol-inhibitor (SI) fungicides or strobilurin fungicides. However, because of resistance in the apple scab fungus to these classes of fungicides, there has been a sharp cutback on use of these materials in Michigan in 2010. The result – powdery mildew infection is fairly common this year, with infection as much as 30-50 percent in some orchards.

Besides the impact of mildew on the current season, buildup of mildew infection will typically ensure the presence of plenty of inoculum for next season. Thus, control is probably warranted if trees are still actively growing. This is particularly important on young trees, where active growth continues, and the consequences of mildew infection are more severe.

Here are some suggestions for mildew control in orchards exhibiting infection currently. We consulted with Dr. David Rosenberger from Cornell University as well to determine possible fungicides to utilize at this time. On nonbearing trees or trees where the fruit crop has been lost to frost, further mildew spread can be effectively slowed with sulfur applications at 10 lbs per acre applied every two weeks. A reduced amount of sulfur should be used on bearing trees to avoid scorching the fruit. This would be the cheapest option to arrest further mildew infection.

On young trees, it is likely worth the investment in an SI, such as Rally, to help limit the inoculum carryover to next year. The new SI fungicide Topguard that was recently registered is an excellent mildewcide and could be used, if it is available. There is some concern with possible development of resistance to SI’s in the mildew fungus in New York. We don’t have any evidence currently to suspect a resistance problem in Michigan. Flint and Sovran, Bayleton, Topsin M, and Pristine are also effective fungicides for powdery mildew control. EBDC’s and Captan are not effective, and may kill other fungi that can inhibit powdery mildew somewhat, making the problem worse.

The powdery mildew fungus overwinters in infected buds. Winter temperatures below -5°F can eliminate some of this inoculum as infected buds can be killed following exposure to these low temperatures (killing the fungus with it). However, according to Dave Rosenberger, the only locations that can really count on cold temperatures taking care of powdery mildew inoculum are locations such as the Champlain Valley in Vermont, which can get temperatures as low as -40°F. Thus, the more mildew can be controlled now; the less chance there is for extensive inoculum to be present next year. 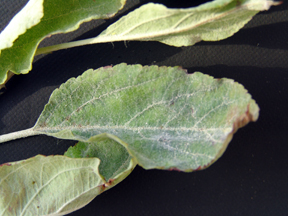 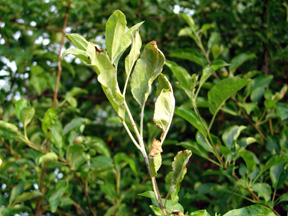