What to do with drought-stressed blueberries

Should growers cut back blueberries that appear to be dying from drought?

About 75 percent of Michigan’s 22,000 acres of blueberries are irrigated and growers with irrigation are struggling to keep up with the demand for water and keep enough water in the soil to support the plant. That leaves over 5,500 acres of unirrigated blueberries that have received almost no water since early June. As the soils have dried out, the fruit on these bushes has shriveled, the leaves have dried up and died, followed by shriveling of this season’s stems. Severely affected bushes look dead or almost so. (For more information, read Maintaining irrigation on Michigan blueberries.)

Growers with severely drought-stressed bushes are now wondering what to do to save the plants. Some have asked if they should cut down plants in non-irrigated fields that are under severe stress where leaves are browning and dying. They think that cutting the tops off will conserve moisture so that the bushes can regrow once rains return.

We have started a research trial to test this, but we believe it is best to leave plants alone at this time. As the plant dies back, it loses more leaves and conserves more water for the remaining leaves and stems. If all leaves have died by now, the bushes may also die, but the crown may put out new shoots next spring or even in the fall after the fall rains begin. If some leaves remain green, these are an important source of sugars for the plant later in the season when rain occurs. 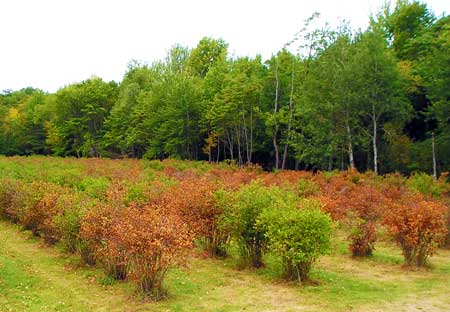 Unirrigated blueberries burning up in the field. Do not cut these
bushes back now. Wait and see what develops with the rest of the
2012 growing season before you decide on a course of action.

If plants are cut down now in the middle of the summer, they will be forced to produce new shoots with their limited stored reserves and water. This will use up limited reserves the plant could use to survive the rest of the summer. These new shoots will not have time to replace lost leaves and are unlikely to harden off in time for winter.

It is better to wait and see what happens in 2012 and then decide how to handle 2013. Many growers want to do something, but sometimes the best course of action is to wait and see.

Impact of heat, drought and related problems on Michigan’s blueberry and raspberry harvest