What’s hovering over my flowers?

Have you ever seen a hummingbird in your garden at night? How about a hummingbird that looked like it had horns? If so, you were probably looking at a sphinx moth, also known as a hawk moth. There are over 120 species of sphinx moths known from the United States and Canada; the term sphinx relates to the appearance and behavior of their caterpillars, many of which assume a sphinx-like posture when they feel threatened.

Many sphinx moths can hover and sip the nectar of flowers just like hummingbirds. Instead of using a long beak to reach into the flowers, the sphinx moths use a thin, tubular proboscis that they can unroll and extend into flowers. The length of the tongue varies greatly with the species, from being almost absent (some do not feed as adult moths) to as much as 4 inches long. When not in use, the proboscis is tightly coiled and stowed under their head. The antennae of most species are long and held stiffly in front of the head, looking a bit like horns.

Some of the sphinx moths are very common insects that many people have seen in their caterpillar stages without ever knowing about the adults. The caterpillars are often called hornworms due to a prominent horn on their tail end. Anyone who has tried to grow tomatoes in their home garden has probably met face-to-face with tomato hornworms.

There are two species in Michigan: the true tomato hornworm and the tobacco hornworm. According to Michigan State University Extension, both will readily feed on almost any plant in the solanaceous family, which includes tomatoes, potatoes, eggplants and peppers. Young caterpillars may already be munching in your gardens right now, but you may not be able to find them until they are much larger and have removed a lot of leaves and some of the tomatoes from your plants. 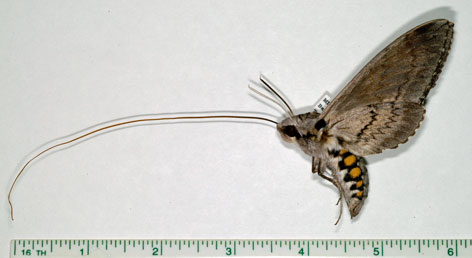 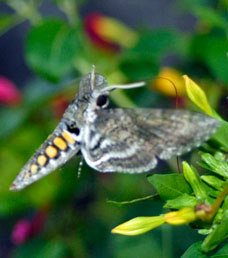 They have remarkably effective cryptic colors and markings, allowing them to blend into the foliage and stems of their host plants. July and early August is a prime time to see the adults of the tomato-feeding hornworms, if you know where and when to look.

The bodies of adult tomato and tobacco hornworms can reach 2 inches in length and their wingspan may exceed 4 inches. The wings are delicately patterned in shades of black, gray, brown and white; their bodies are similar shades with bold yellow-orange spots down the sides of the abdomen.

They are extremely strong fliers, able to travel many miles in an evening to find your garden and lay eggs on your plants. If you would like to see these beautiful moths live and in person, you’ll need to stay out late, as they typically don’t fly much before 10 p.m. With a flashlight, look for them around the flowers of phlox, trumpet vine, honeysuckle, petunia, bouncing bet and other deep-throated flowers. Don’t expect them to land on the flowers – their wings will be a blur as they hover several inches away, sipping the nectar with their 4-inch tongue.

There are a number of other common species that may be encountered at garden flowers. The great ash sphinx, Pandora sphinx and Achemon sphinx are also late-night visitors to flowers. Around sunrise and at dusk, or even on overcast days, the white-lined sphinx is a common sight at garden flowers or at lilacs. Some fly in broad daylight such as the hummingbird sphinx and the bumblebee sphinx. Both are excellent mimics of their respective models. 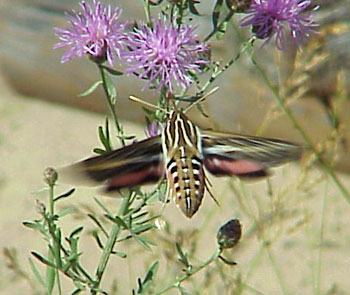 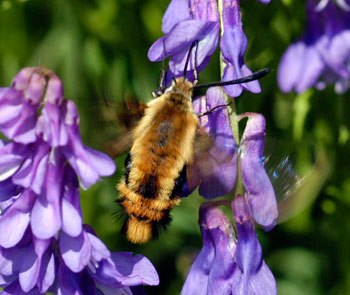 The usual suspects for yard and garden damage

Bring a bit of spring indoors during the winter