This past summer, severe damage and death of thousands of trees, mostly conifers, associated with application of a new turf herbicide (Imprelis) was widely reported in the media and ultimately resulted in EPA issuing a Stop Sale, Use or Removal order for the product in August 2011. Subsequently, the manufacturer, DuPont, initiated a claims process for applicators and homeowners with damaged trees. As part of the claims process, DuPont is working with a claims resolution company, which has contracted arborists to assess and evaluate dead and damaged trees. As one would expect in a case of this magnitude, the resolution process is moving slowly and applicators and homeowners continue to have questions about the impact of Imprelis on trees. Some of the common questions we have received are noted below.

What trees were affected by Imprelis?

Conifers were by far the common trees that were affected, especially eastern white pine and Norway spruce. This is consistent with Imprelis’ mode of action as an auxin-mimic herbicide since these are normally fast-growing trees and their spring growth flush coincided with Imprelis application. It is important to note, however, that other tree species were also affected. The Purdue Plant and Pest Diagnostic Laboratory has compiled a list of about three dozen tree and shrub species in which Imprelis injury symptom have been observed or in which the Indiana State Chemists office has detected Imprelis residues.

How long does Imprelis last in the soil? When is it safe to replant?

The amount of Imprelis remaining in the soil will depend on the initial concentration and the rate of soil degradation. Imprelis is degraded mainly by microbial activity and photo-degradation, so the rate of breakdown can vary widely. The soil half-life of Imprelis applied to turf is 37 to 103 days. This means the initial concentration is reduced by 50 percent after one half-life and then reduced by 50 percent again (25 percent of initial) after the second half-life and so on. Assuming the half-life data are correct and at least three half-lives will have passed since 2011 applications, soil concentrations of Imprelis should be no more than one-eighth their initial level by early spring 2012.

For areas in which trees received only minor damage, this suggests soil concentrations will likely be below damaging levels by spring. Where initial soil concentrations were higher and trees were killed or severely damaged, however, it is less clear that it will be safe to plant this spring. DuPont conducted a study in which they planted cotton, soybeans, and sunflowers in fields one year after Imprelis application and found that responses varied from no plant damage to plant death. Therefore, a conservative approach would suggest waiting until at least fall 2012 before replanting where trees were severely impacted.

This depends on the extent of tree damage, desired function of the trees in the landscape, and homeowner tolerance (Photo 1). For trees in which Imprelis damage was largely confined to the uppermost terminal shoots and did not decline further during summer 2011, it seems likely they will survive. 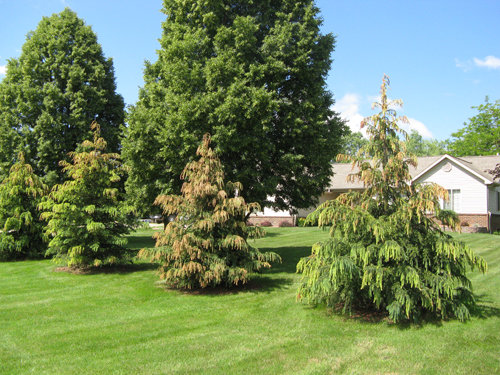 Photo 1. The ability of trees to recover from Imprelis injury will depend on degree of damage,
function in the landscape, and homeowner tolerance.

The question then becomes, will they be acceptable in the landscape? If the primary function of the trees is as screening elements, this level of damage may be tolerable. If, on the other hand, these are specimen trees where an upright, symmetrical form is desired, the trees will require corrective pruning and training of a new leader or may require replacement (Photos 2 and 3). 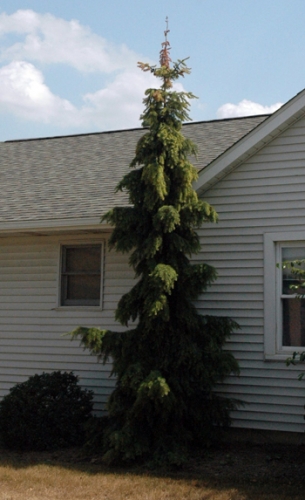 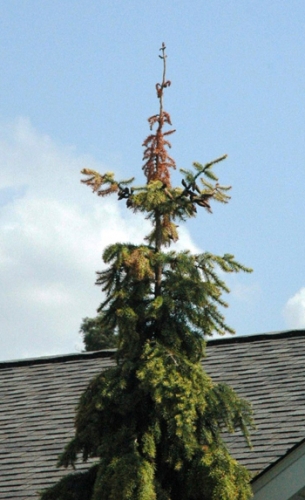 Photos 2 and 3. Although this Serbian spruce appeared to suffer relatively minor damage, it will require
considerable top-work in order to regain its desired form.

For trees in which more than the uppermost portion of the crown was affected, judgments will need to be made on a case by case basis factoring in landscape function and client tolerance. The more challenging question, and one for which we don’t have an answer, is what is the long-term prognosis for affected trees? The degree of visible injury to shoots can be estimated, but the nature and extent of damage to roots is entirely unknown. It’s possible, and perhaps even likely, that some trees that reflush and appear healthy this spring may be more susceptible to damage by drought or other severe stresses further down the road.