What’s up (or not) with Great Lakes water levels?

Some of the Great Lakes are expected to reach all-time low water levels this winter. Why do Great Lakes water levels change? We look at short-term lake level changes in the first of a two part series.

Some Michigan residents keep track of the Great Lakes water levels by eyeballing them – keeping an eye on the lakes over time relative to coastal landmarks. Others keep track more analytically by looking at the Monthly Bulletin of Great Lakes Water Levels, produced by the U.S. Army Corps of Engineers. Whatever the case, Great Lakes water levels do change, whether over the course of a few days, a month, a year, or many years. The challenge is trying to predict some of those changes.

Short-term changes are frequent on all the Great Lakes due to weather changes. If you know what storm surges and seiches are, you know about short-term water level changes. Storm surge is an abnormal rise of water generated by a storm, and it occurs where winds blow onshore. The National Oceanic and Atmospheric Administration (NOAA) has produced a video that shows a storm surge as it builds, demonstrating its potential effects on the coast.

There are several factors that contribute to the amount of surge a given storm produces at a given location:

8)  local features such as bays, inlets, rivers and islands

As for seiches, the word itself is French for ‘to sway back and forth’. Wind blowing across the water causes the water to move downwind, from one area of the lake to another. When the wind stops, the water sloshes back and forth (oscillates) until it reaches equilibrium once again. The sloshing back and forth is called a seiche. Seiches are standing waves with a central node and antinodes at either end of the lake. 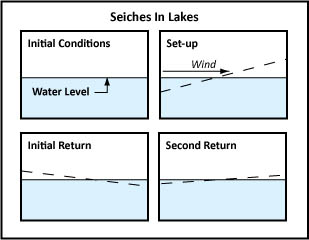 Among the Great Lakes, the most pronounced seiches occur in the lakes with an east-west orientation. Why? Because most storms in the Great Lakes move from west to east. Those lakes with an east-west orientation therefore present their entire length to the winds, and the longer the distance over which winds blow (this distance is called the fetch), the higher the waves and the greater storm surge. Why are seiches significant? They can cause water levels to change by several feet over a short period of time, resulting in damage to anchored ships, as well as coastal flooding and erosion. In addition to causing damage to shorelines and structures, storm surges and seiches may also impact the biology of lakes. If you’d like to “see” a 7’ Lake Erie seiche, check out a webpage developed by NOAA’s Great Lakes Environmental Research Laboratory that provides data as well as graphic and video imagery of the 2003 seiche.

Despite conservation efforts, the red swamp crayfish has established a foothold in Michigan