White mold is becoming a major issue in Michigan potato fields. Know the symptoms, disease cycle, and how to monitor and control this important disease.

White mold symptoms first appear as water-soaked lesions 14 to 20 days following row closure, depending on the cultivar and cultural practices (see white arrows on Photo 1). Lesions usually first appear in the intersections between the stem and branches, or on branches and stems in contact with the soil (Photo 2). These become quickly covered with a white cottony growth that can spread rapidly to nearby stems and leaves if moisture is present for several hours. As lesions expand, they can girdle stems causing foliage to wilt. When conditions become dry, lesions dry out and turn beige, tan or bleached white and papery in appearance. As infected tissue decays, hard, irregularly-shaped resting structures called sclerotia form on the inside and outside of decaying tissue. Sclerotia are usually 0.25 to 0.50 inches in diameter, start out white to cream, and gradually turn black with age (Photos 3 and 4). Stems are frequently hollowed out by the fungus leaving a papery shell to cover numerous sclerotia. Sclerotia eventually fall to the ground as infected stems dry out and the host plant dies. No stem rot symptoms are observed on below-ground tissues, such as roots, stolons or tubers. 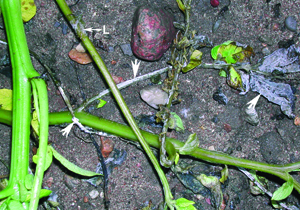 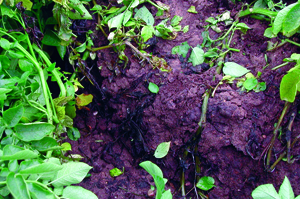 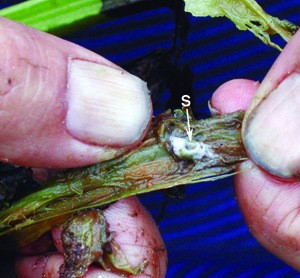 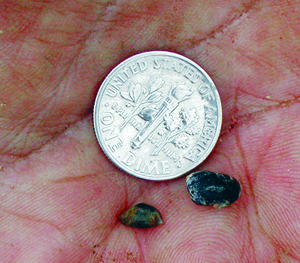 Photos 3 and 4. Sclerotia of Sclerotinia sclerotiorum (0.25 to 0.50 inch in diameter), start out white to cream in color and gradually turn black with age

White mold is caused by the soil-borne fungus Sclerotinia sclerotiorum. The pathogen causes disease in more than 400 different plant species. Host plants in Michigan include alfalfa, dry beans, soybeans, peppers and tomatoes, as well as some common weeds associated with potato production like lambsquarters, pigweed and nightshade. Sclerotiniasclerotiorum overwinters from one growing season to the next as sclerotia, but sclerotia can also survive in the soil for several years. Sclerotia require a conditioning period of cool temperatures before they can germinate, but these chilling requirements are easily met during Michigan winters.

In late spring, sclerotia within 1 to 2 inches of the soil surface germinate when the crop canopy shades the ground and soil moisture remains high for several days. After germination, small, pink to beige, flat to cup-shaped mushroom-like discs called apothecia are formed. The fungus does not produce conidia (asexual spores), but ascospores (sexual spores) in the apothecia. Ascospores are the primary source of inoculum in potato.

Up to eight million ascospores are formed in each apothecium, and under favorable conditions of temperature and humidity (cool, wet weather), they are forcibly ejected into the air. Ascospores are dispersed by wind and air currents and can be spread throughout an entire field or to adjacent fields. Apothecia frequently occur in winter wheat fields that are cropped after potatoes, beans or another susceptible host and wind currents from these fields to neighboring potato fields may carry ascospores. The peak period of ascospore release has been found to coincide with initial full bloom of potatoes. Ascospores are similar in size to pollen, and when being dispersed by air currents may be caught particularly well by potato blossoms.

Potato blossoms and other plant parts such as petioles acquire ascospores while in or on the canopy. In high humidity and low air movement environments, ascospores germinate and infect these flowers and other contaminated plant parts as they senesce and drop to the ground or are trapped in the canopy. The fungus then grows out of the senescing tissues onto healthy stems and leaves in the lower parts of the canopy.

When warm and dry soil conditions are not favorable for the production of apothecia and ascospores, sclerotia may germinate directly producing mycelia that grows and infects adjacent (less than about 1/8 inch) plant tissues, occasionally affecting the crown area of potato plants early in the growing season. While mycelium from sclerotia can infect the crown area of potato stems, ascospores are unable to infect potato foliage or stems directly, even under ideal conditions. As the fungus colonizes healthy tissue, it produces water-soaked lesions with white, cottony growth, and sclerotia form in the decaying infected tissue as described above. The disease cycle is repeated when a susceptible host grows in close proximity to the sclerotia (Photos 5 and 6). 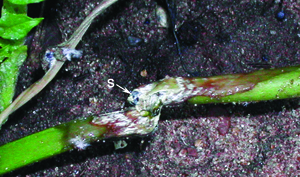 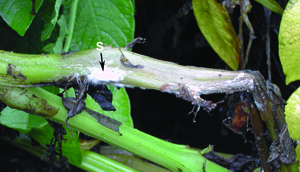 Photos 5 and 6. Sclerotia of Sclerotinia sclerotiorum developing in stems start out as a mass of mycelium on the stem and turn white to cream in color. 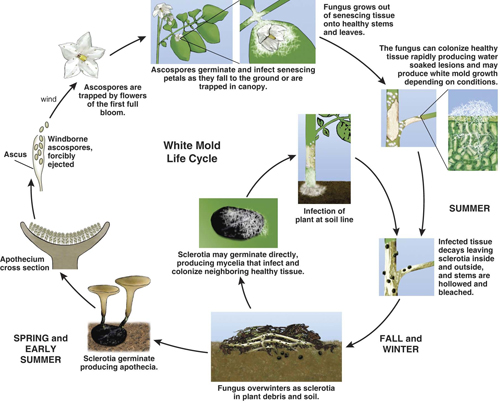 Disease cycle of white mold in potatoes. Click on photo for a larger view.

Effective management of white mold requires implementation of an integrated disease management approach. The disease can be controlled primarily through the use of cultural practices and foliar fungicides.

Cultural control. Cultural practices, such as removal and burning of infected plant debris, eradication of weed hosts and crop rotation with non-susceptible hosts like corn, or weak hosts such as small grains, will help minimize sclerotinia rot in subsequent potato plantings. However, since Sclerotinia sclerotia can survive for several years in the soil, it may be necessary to grow non-susceptible hosts in long rotations to reduce inoculum levels significantly. With these rotations, sclerotia will germinate, but the fungus will not have a suitable host to infect and will not be able to continue its life cycle. If a field has a history of white mold, avoid rotating into susceptible hosts such as dry beans, soybeans, alfalfa or canola.

Good fertility management to prevent excessive canopy development will also suppress white mold. As such, cultivars that naturally produce thicker, dense canopies are at higher risk of white mold than those that produce sparser canopies.

Since this disease is favored by high humidity and free water in the crop canopy, proper irrigation management is a critical factor in dealing with potential white mold problems. Irrigation strategies that reduce humidity, free moisture in the canopy and allow the soil surface to dry will help decrease white mold. As such, irrigating in cool, cloudy weather should be avoided and irrigation should be timed to allow plants time to dry before nightfall. Cultural practices that help to prevent late blight disease development will also help in white mold management.

Chemical control. Effective fungicide products against white mold include Omega (a.i. fluazinam), Topsin (a.i. thiophanate-methyl) and Endura (a.i. boscalid), and against stem rot include Tanos (famoxodone + cymoxanil). Applications of fungicides at initial full bloom are effective in reducing the number of infected stems, however, applications prior to row closure or at blossom drop offer erratic protection at best.