Have you seen the top-most shoot (terminal leader) of a white spruce or white pine curl, then die, in June and July? (See images) Although more prevalent in the northern part of the state, white pine weevil may also attack spruce and pine in southern Michigan as well. The small, quarter-inch long adult weevil becomes active early in the spring, usually in early to mid-April, crawls up onto the trunk and lower branches to do some bark feeding before mating and depositing eggs under the bark on an upper terminal, usually the top-most terminal. The eggs hatch and the young maggot-like larvae feed under the bark in June and early July. Infested shoots often curl before wilting and dying by mid-July.

Damage from white pine weevil can be prevented by spraying the lower trunk and upper terminals of spruce and pine in early to mid-April and again two weeks later with products that contain bifenthrin (Talstar, Onyx), permethrin (Astro), or cyfluthrin (Tempo, Bayer Multi-Insect Killer). Apply these products at rates given on the label for bark beetles or borers. An alternative treatment is basal application of imidacloprid (Merit, Xytect or Bayer Tree and Shrub Insect Control) at the rate given for borers. Most of the imidacloprid products now recommend two basal applications (instead of one) for trees with a trunk diameter greater than 12 inches. Soil treatments with imidacloprid should be made early March, as long as the soil is not frozen, or in October to allow time for tree roots to absorb the insecticide and move it up into the tree. 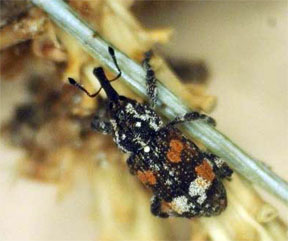 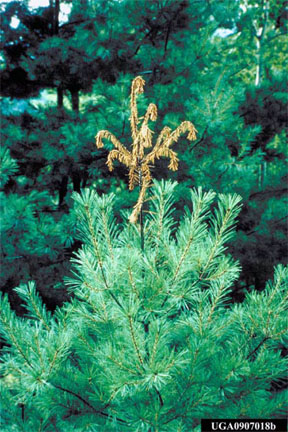 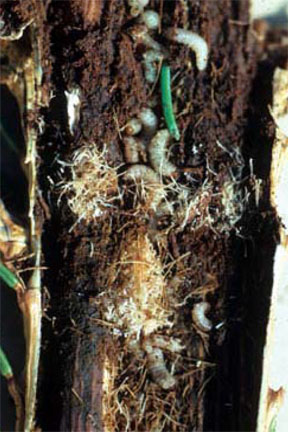 White pine weevil larvae feeding under
the bark of a terminal shoot.