Why are my evergreens losing their needles?

Loss of evergreen needles does not mean the trees are dying. The trees naturally shed their needles in a cycle of about two years.

Michigan State University Extension Master Gardener hotlines are receiving many calls from gardeners around Michigan concerned about their pines, spruces or arborvitaes dropping many needles that have turned yellow or brown. They have never seen anything like it and are concerned that a valued part of their landscape has a terrible problem or is dying.

For some people, it may be a new home and landscape and they are unfamiliar with evergreens. For others, they have forgotten what happened just about a year ago in their yard. Either way, they are all concerned as to what is going on. The trees they are concerned about are called narrowleaf evergreens. That simply refers to the narrow needles staying green for the entire year, but some have interpreted that to mean “live-forevers.” They think that each needle is permanent and will remain for the life of the tree. There is also a category called broadleaf evergreens with members like boxwood and Rhododendron. Those needles are dropped singly and are rarely noticed.

Each kind of evergreen, like pine, spruce, fir and arborvitae, have needles with invisible “timers” that eventually go off and the needle dies. The trees have been doing this for as long as evergreens have existed. Those times expire in the fall of the year. The oldest needles on the trees are cast off. These needles are located on the inside of the tree, closest to the trunk. The needles drop below the tree to provide valuable mulch or scatter into the lawn when the wind is blowing. 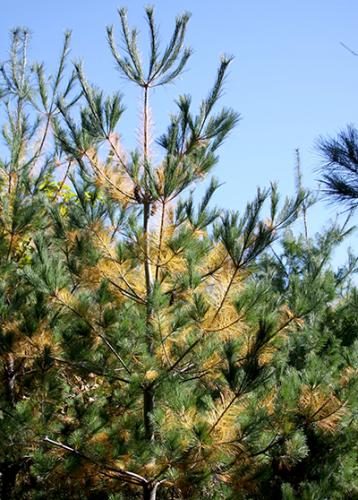 When assigning a length of life to a needle, these times are approximate, but generally, needles on pines live for about two years. They are formed in the spring and the next year they shed in the fall. Arborvitaes have needles that last about two years, but for firs, Douglas firs and hemlocks, the length of life is three to four years. Spruces have the longest lasting needles at approximately five years. For white pines, the needles that are going to be dropped soon turn a brilliant lemon yellow. Arborvitaes will turn tan or yellow. For the others, the needles turn an inconspicuous brown. 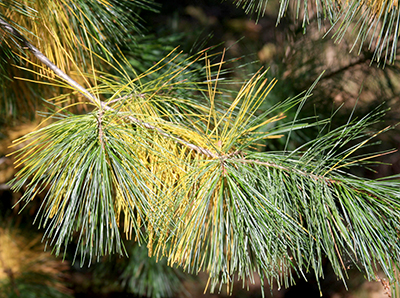 The yearly needle loss in the fall is to be expected and is no reason for concern. If needles are dropping from the ends of the branches, this could be a serious problem. Evergreens only produce new needles at the ends of the branches. Those buds are formed at the ends of twigs and branches right now for next spring. New needles do not form on the interior of the tree. This is why pruning evergreens correctly is so important. Removing the growing point from the end of a branch or twig could eventually kill the branch. Each year, needles closest to the trunk fall off, but no needles are produced at the end and eventually the area with dropped needles runs into the dead tip of the branch.

Evergreen needles make ideal mulch under the trees. The mulch keeps the tree healthier by preventing top evaporation of moisture and regulates the soil temperature so it warms and cools slowly. A depth of 3 inches is desired, but it might be necessary to supplement the needles with additional organic mulch like woodchips to get the desired 3-inch depth. Smart gardeners appreciate the fact that they can recycle the fallen needles in place.

The yearly needle drop each fall seems to catch many people by surprise. Many calls and questions are generated in the fall, but with the first strong wind, those needles drop off and all is forgotten until next fall.