Why are my roses changing color?

Question from a Landscape Alert reader

“Several friends and I are confused and bewildered by our gardens this year. I have a rose bush that's well established and has always been pink. It's a J & P rose although the tag has long since disappeared. This year the rose is blooming with flowers that are yellowish-peach – more like a Peace rose than the vibrant pink it has always been. My mother and one of her neighbors had irises that bloomed different colors this year than last - Mom's was a dark rust color last year, and this year it's maroon!”

It is not unusual for roses to "change color." A minor change occurs when cooler weather intensifies pink-to-red shades, or age and hot weather fade them. Knock Out ‘Blushing’ rose flowers, for example, are medium pink in cool springs like this and in fall, but a washed-out, nearly-white in summer. The 'Rainbow' and 'Sunny' Knockout rose marketing capitalizes on the fading of pastel pink and yellow petals as they age, emphasizing that at any one time there are deeply colored buds, pastel newly opened flowers, and pale to off-white older blossoms. The contrast is greatest, and those plants are most attractive in cool weather. Some of our Master Gardener volunteers have complained they are quite disappointed in the "washed-out" summer appearance of those varieties.

The second type of color change is due to the fact many roses are grafted, so the branches are one variety and the lower root system is a hardier rose. If those lower roots sprout branches, they may appear different in leaf size, shape and flower color. They are more likely to have such sprouts when planted shallow, or if the top branches are all killed by cold temperatures. Around Monroe, there are many identical roses near homes that bloom abundantly at the same time in June; two-inch, dark red flowers with prominent yellow centers. Rosarian Nancy Lindley told me they are most likely the variety 'Dr. Huey,' which is often used for the hardy rootstock, and those roses all probably started out with branches and blossoms of a different variety such as a less hardy tea rose.

The third change happens when one branch actually has a mutation affecting blossom color. Many of our colors started as a single odd branch, called a sport, such as the branch of pale pink roses on a Red Knock Out rose that became a new variety, Knock Out ‘Blushing’ rose when many buds from the branch were grafted onto other rootstocks. One Knock Out ‘Blushing’ rose in our demonstration gardens either reverted (mutated back), or it was grafted onto the red version, because we have a red-flowering branch near the base.

Irises are far less susceptible to the color changes described above in roses. The MSU Extension educators on our conference call this morning agreed it is far more likely that a different variety won the competition for space for some reason. One colored variety may have been killed out in one or two seasons by severe borer attack, allowing a seedling or stray rhizome of another variety to proliferate. The successful plants may be blooming for the first time even if they have been multiplying in the spot for a couple of years or more. Few gardeners keep track of which iris variety was planted where and when, nor are they careful to deadhead and remove seedlings. So reports of color change are not uncommon. 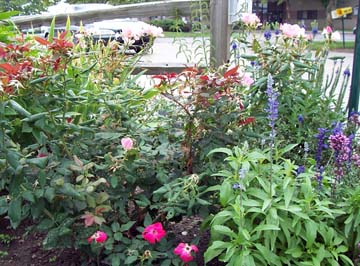