Why are trees and shrubs so slow to leaf out this spring?

If it seems like some of your favorite trees and shrubs have been slow to leaf-out or flower this spring, you are right. Many trees and shrubs in Michigan suffered significant die-back or had poor flowering this spring due to this past winters’ cold temperatures. In addition, temperatures in March and April 2014 were relatively cool and added to the delayed spring.

As trees and shrubs have finally begun to push new growth, the extent of this past winter’s injury is becoming more apparent. Some common examples of winter-related problems are delayed or incomplete bloom on forsythia, magnolias and dogwoods. In addition, we are seeing delayed leaf-out or stem die-back on many southern species such as redbud, sweetgum, tulip poplar and baldcypress. Some of the most severely affected trees from this past winter are zelkova, which frequently suffered severe die-back, and Douglas-fir and dwarf Alberta spruce, many of which have had significant winter burn injury. Additional plants that have winter-related die-back or winter burn are Japanese maples, rhododendrons, yews and boxwoods. 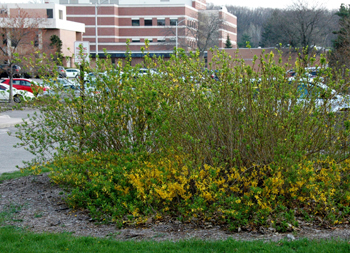 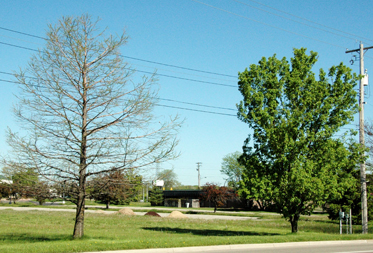 Left, Snow cover protected the lower part of these forsythia, resulting in a full load of flowers. Above the snow line, flowering was thin to due bud kill. Right, Like many southern species, baldcypress trees were very late to break bud this spring.

Why was this winter so hard on plants?

As noted in earlier Michigan State University Extension articles, this winter saw five major outbreaks of artic air in Michigan. If we compare the coldest temperatures observed around Michigan this winter with the USDA Plant Hardiness zone (average lowest temperature) for each location, we’ll see that many locations in Michigan were at least 5 degrees Fahrenheit colder that their Hardiness zone (see map). For many plants, this was cold enough to result in damage to needles or leaves on evergreens or damage to flower buds and other sensitive tissues. In addition to cold injury, plants were also damaged by heavy snow loads and mammals during the winter. 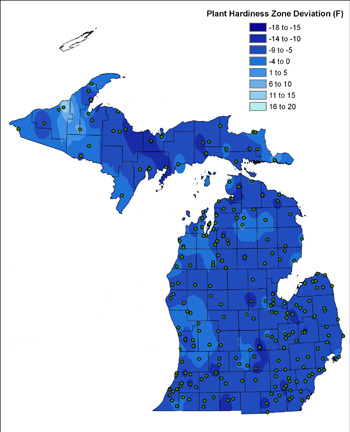 Temperatures throughout Michigan were significantly colder than the USDA Hardiness zones that usually guide tree and shrub selection. Map by Aaron Pollyea, MSU

Bud and tissue damage during the winter contributed to some of the issues we have seen with poor or incomplete flowering and stem die-back. Early spring growth was further delayed for many plants by cool temperatures. In the spring, plant growth responds to an accumulation of warm temperatures, referred to as growing degree days (GDD). As temperatures exceed a given threshold (50 F is common for many plants), plants begin to accumulate heat sums that result in bud break, flowering and other key developments. This spring, GDD accumulations have lagged about one to two weeks behind normal for most of Lower Michigan, resulting in delayed development of many trees and shrubs. For example, in East Lansing, Michigan, crabapples are normally in full bloom for graduation week at MSU, which is the first week in May. This year, peak crabapple bloom occurred in late May.

What can be done about winter injury?

In many cases, pruning out dead or damaged material is the principle course of action, especially when stems have clearly died back. Be aware that many shoots that look dead could still be alive, but delayed. A “scratch test” to look for green tissue under the back is often the most reliable way to determine if shoots are dead or alive. When pruning, avoid random heading cuts and always prune back to a live bud or branch union. Conifers, such as spruces, fir and Douglas fir, can produce adventitious shoots, so even if buds are killed along the stem, they may still resume growth as long as stem tissue is alive. One of the keys for conifers and other trees is to maintain a single leader at the top. This is important to maintain tree form and to reduce problems down the line from poorly developed branch attachment. 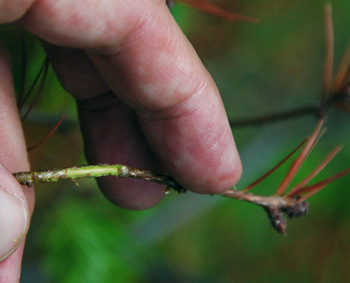 Where there’s green; there’s life. Although stems or plants may appear dead, the scratch test may indicate otherwise.

What’s eating my viburnums and how can I stop it?