April 2013 has been wetter and cooler than average, which could affect asparagus. As of April 25, the Hart Enviro-weather station has reported a total of 4.8 inches of rain for the month, about 2.2 inches more than average precipitation for the years 2008-2012. Similarly, data from the Michigan State Climatologist Office suggests Oceana County received approximately 3 inches more precipitation than average over the last 30 days. In addition, air temperatures have been approximately 5 degrees Fahrenheit cooler in Oceana County, with soil temperatures also lagging at the Hart Enviro-weather station. What will this weather mean for asparagus? 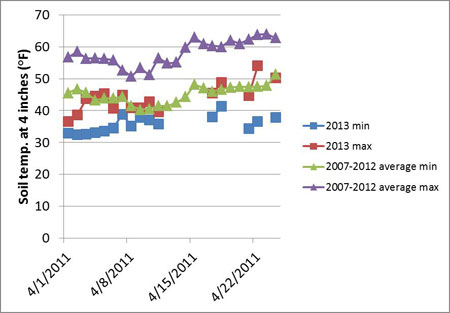 Increased rainfall favors the spread of Phytophthora asparagi within those fields where this pathogen has become established. This water mold causes a spear and crown rot and is favored during periods of heavy rain. For those fields with a history of this disease, the wet weather may increase Phytophthora spread from infected crowns to nearby healthy crowns. Also, saturated soil conditions will increase the severity of infection for those crowns that are newly infected.

Be on the lookout for “blind crowns” – crowns that do not produce shoots – which may increase in frequency this year if Phytopthora is present within a field.  It is not known whether the extent of this problem may be counteracted by the cool soil temperatures, which could limit Phytophthora spread and disease development. 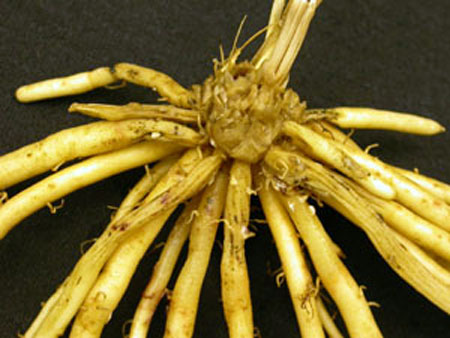 Cooler temperatures may also delay asparagus development. As of April 25, growing degree day (GDD) totals are two or more weeks behind normal. Similarly, April soil temperatures at the Hart Enviro-weather station have been cooler than average (see table above). If cool temperatures continue, asparagus harvest could be delayed, shortening the window available for harvest prior to occurrence of warm, summer temperatures. However, the weather is predicted to warm over the next week; hopefully future weather will allow asparagus harvest to proceed with only minor delays.