Will we see a lot of winter injury during the spring of 2008?

Next to “Will we have good fall color this year?” this question on winter injury is the one I dread the most. In both cases, we usually don’t know the final answer until the event is actually upon us. So far, the winter of 2007-2008 has been the closest thing we’ve had to an “average” winter since I moved to Michigan in 1999. Granted, things have been chilly the past couple of weeks, but we’ve not had any record-setting cold temperatures this winter. This winter has also been relatively free of wide temperature fluctuations that are usually associated with winter injury to our landscape plants in Michigan. If we compare daily minimum and maximum temperatures recorded by the Michigan Agricultural Weather Network (MAWN) site at the MSU Horticulture Teaching and Research Center in East Lansing for this winter (see figure), we see that temperatures generally tracked along with the average for the last ten years. We had some sub-zero weather right after New Year’s, which is not unusual and shouldn’t cause any freezing injury. Landscapers and nursery folks that attended the Great Lakes Trade Expo in January will recall we had a warm-up the second week of January, but this was followed by a gradual cool-down that should have resulted in a “soft landing” for most of our plants.

Based on temperature patterns so far, we wouldn’t expect to see major issues with freezing injury. Heavy snowfall, on the other hand, could raise some concerns. Some parts of the state experienced near-record snow-fall totals this winter. This raises the possibility of several other forms of winter-related problems including broken limbs on trees and shrubs from heavy snow loads, salt damage and animal damage.

Most trees and shrubs are best pruned when they are dormant so snow-broken limbs can be pruned whenever weather permits and it’s safe to do so. Large, hanging limbs are extremely dangerous and may best be handled by a professional arborist. Remember that trees such as maples and birches are “bleeders” and will produce a lot of sap from the pruning wound. The U.S. Forest Service has a nice “how to” guide on pruning trees at: http://www.na.fs.fed.us/spfo/pubs/howtos/ht_prune/prun001.htm

Salt damage to trees and shrubs may also appear this spring. Studies have shown that salt spray can travel over a quarter of a mile, especially from roadways with high-speed traffic. For conifers, look for scorched or dead needles, mainly on sides of trees facing roadways. Eastern white pines are particularly sensitive to salt exposure. For broadleaved trees and shrubs, salt damage often appears as stem or branch die-back. In some cases, trees may also form “witches’ brooms” or clumps of adventitious shoots near the branch terminals.

A variety of mammals such as deer, mice and rabbits can cause browse damage. Because of the greater snow depths this year, you may be surprised at the height of plants where damage occurs. Physical barriers (fencing, netting, wire cages) are the best way to prevent animal browse damage. Reducing weeds and eliminating cover can help to reduce damage from mice and rabbits. Deer repellants vary in effectiveness from very effective to not at all. This bulletin from Colorado State University provides tips on reducing deer damage and effectiveness of repellants: http://www.ext.colostate.edu/pubs/natres/06520.html

The last thing to note about winter injury is, to quote Yogi Berra, “It ain’t over ‘til it’s over.” Late winter injury (freezing injury that occurs in late winter/early spring) is probably the most common form of winter damage that we see in Michigan landscapes year in and year out. In mid-Michigan, late winter injury usually occurs in late April or May once trees and shrubs have begun to break bud and then temperatures dip back below freezing. For most landscape plants, late winter injury is usually mild and plants are able to resume normal growth. In some cases, flowers may be lost from magnolias and other early-flowering plants or terminal shoots may be damaged and require corrective pruning to maintain tree form.

So, will we see a lot of winter damage this year? We will certainly see some. How much? Ask me again in June. 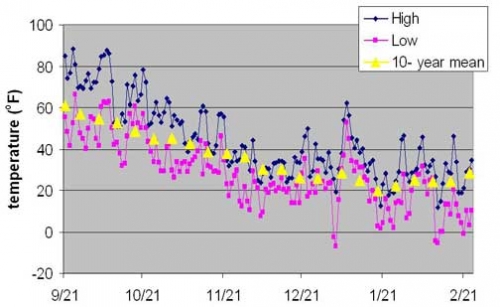