Will your corn reach maturity?

Using a mid-Michigan example, here’s how to assess your fields to estimate whether your corn will mature before the first frost.

The 2011 growing season was marked by a wet spring, warmer than normal July and a wetter than normal August. Driving down the back roads in mid-Michigan, the corn looks pretty good, but will it make it to maturity? To check the development of the corn, I selected five ears from a field planted in the second week of May and another five ears from a field planted the first week of June. In mid-Michigan, these were two windows when a lot of corn was planted.

Corn planted in the second week of May was generally at the R5 Kernel Dent Stage. This corn will need approximately 300 Base 50F Growing Degree Days (GDD) to reach physiological maturity. 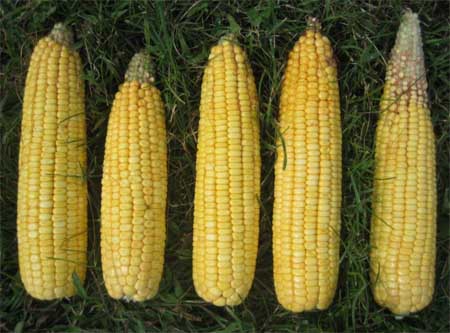 Corn planted in the first week of June ranged from late milk to early dough stage and will take approximately 650 – 750 GDD to reach physiological maturity. 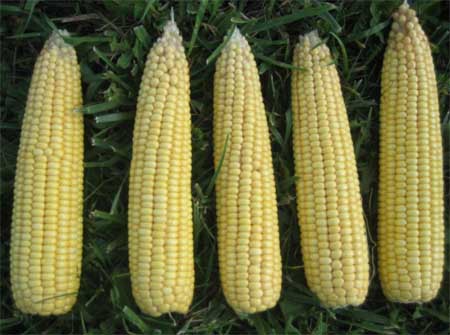 *Kernel milk-line moved 0.5 to 0.75 the distance between crown and base.
**Black layer formation and milk disappearance from kernel under normal development.

Premature frost or extended cold temperatures may cause black layer formation at earlier stages and wetter moisture. (From Delayed Maturity in 1997 — Potential for Frost Damage and Other Effects in Corn, by Marcus Jones, MSU Crop and Soil Sciences, and Jeff Andresen, MSU Geography.)

In mid-Michigan, there is a 50 percent probability the first killing freeze will occur by October 8 or earlier at East Lansing and October 15 at Alma. The average number of accumulated GDD from August 31 to October 8 during the past 5 years in this area is around 482. Given this, corn that has already reached the dent stage should reach physiological maturity. Later planted corn will need a much longer fall. The five-year average of accumulated GDD for the area from August 31 to October 31 is 596.

To get the previous seasonal GDD totals, go to the Enviro-weather website at www.enviro-weather.msu.edu and choose a nearby station representative of your area by choosing from the station pull-down menu in the upper right of the screen.

Station pull-down menu is circled in red. The yellow circles on the Michigan map indicate
the locations of stations.

From the list of applications that appears in the middle of the station’s web page, look for the “Degree day tools” section.  Choose “Degree day comparisons: Last 5 years at this station (alfalfa and corn development).” Click on “last 5 years.”

The red circle shows where to click to get the degree day comparisons for the past 5 years
with data generated for corn and alfalfa development.

You should now see the base 50F GDD totals for each year March 1st through the current date for the past 5 years and the current year. You can also obtain the GDD totals for today’s date through some hypothetical later date in the year by adjusting the start and end dates above and clicking “execute” (note that you need to set the year of the end date to the previous year, e.g., this year that would be 2010).

Degree day totals for the past 5 years at the East Lansing (MSUHort site) station, August 31
– October 8 from Enviro-weather’s “Degree day comparisons feature for alfalfa and corn
development.” Red arrow shows date selected for the day corn was picked for estimating
(August 31). Black arrow shows where to set the year to 2010 for past data. Red circle shows
the column with information related to corn development.

A warmer than average fall or a late killing freeze will greatly impact the outcome of the June-planted corn. For example, by accumulating an average of 16 GDD/day over the next 38 days, the corn will be mature by October 8. Enviro-weather projects average GDD accumulation for the next seven days at just under 20 per day (See the “Average degree day summary” feature).

The 2011 growing season has been full of surprises! Making observations in your own field will give you an idea where you stand today. On a positive note, the latest weather outlook for the fall season (September-November) does suggest above normal mean temperatures for nearly all of Michigan and much of the Great Lakes region, which would tend to increase the odds that the late-planted crop does reach maturity. Unfortunately, there is no accurate way of predicting the first killing freeze of the season more than several days out. So, the rest of the story will unfold on a day-by-day basis.

Use a PSNT to measure nutrients from manure