Winter injury in rye and other cover crops

Winter injury in cover crops is a common phenomenon and varies with species and growth stage. With mustard cover crops for example, young plants normally survive low temperatures better than larger plants, especially those at or beyond flowering stage. In hairy vetch, young seedlings are more susceptible to winter injury than relatively larger seedlings.

This phenomenon has been less documented with cereal rye cover crops. Observations made at a couple of fields this spring suggest that the timing of rye cover crop planting may have a significant effect on winter performance. Some fields that were planted early (August) sustained greater winter injury compared to those planted late in the fall. This resulted in a significant reduction in plant density and overall cover crop biomass. High stand loss due to winter injury may reduce the benefit of the cover, especially in areas with high wind erosion. This phenomenon varied with location and some of the field did not show significant stand loss between early and late planted fields. A study will be conducted this coming season by one of the horticulture graduate students to test the effect of planting date on winter survival of rye cover crop. 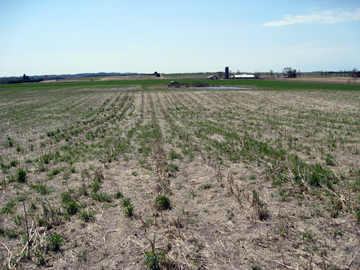 Severe stand loss in rye cover crop in a field at Oceana County.