Damage was common on boxwoods during the 2014-15 winter, but it should not be confused with boxwood blight.

As noted in earlier Michigan State University Extension articles, such as “Assessing cold injury in conifers,” the past two winters have been hard on many landscape plants, especially evergreens. We have seen widespread damage on boxwoods in particular. Because they are broadleaved evergreens, boxwoods are subject to damage from winter desiccation as well as cold damage, both of which can lead to extensive browning. Fortunately, winter damage on evergreens often appears worse than it actually is and frequently plants can recover after some careful pruning to remove affected shoots.

Winter damage to boxwoods should not be confused with boxwood blight. Boxwood blight is a devastating fungal disease of boxwoods that can rapidly spread through a landscape or nursery. Boxwood blight has been confirmed in several states, but as of May 2015 it has not been confirmed in Michigan. Symptoms of boxwood blight include circular, tan leaf spots with a dark purple or brown border and black stem lesions or blackening of the stems. Infected leaves become tan and readily drop from the plant, leaving bare stems.

Young plants with boxwood blight are typically more severely impacted and can be killed. Older, mature boxwood plants may attempt to re-leaf after the defoliation. Other stressing factors can be compounded, resulting in plant death. The boxwood blight fungus has a short life cycle and infections can spread quickly between plants, especially under humid, warm and wet conditions that favor disease development.

Since winter damage and boxwood blight cause leaf browning and defoliation, there is some potential for confusion. However, there are important differences in the pattern and progression of symptoms that make them relatively easy to distinguish. Winter damage to boxwoods is often indicated by a “snowline” (Photo 1). Foliage that was protected by snow from wind and severe cold will remain green, while exposed parts of the plant will be brown. A plant infected with boxwood blight, in contrast, may show a more random pattern of browning or turn brown from the bottom up (Photo 2). 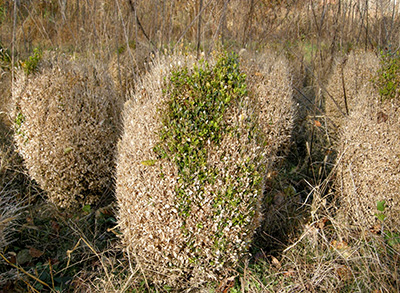 Most importantly, leaf browning and defoliation will continue until the entire plant is affected (Photo 3). In the case of winter damage, the total extent of the injury will usually be apparent once weather warms up in the spring. 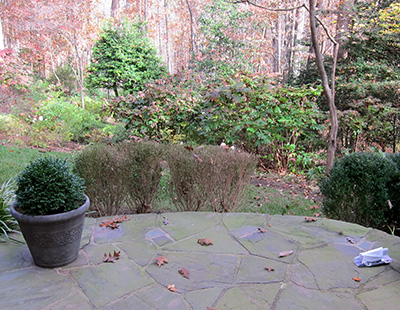 It is critical to reiterate there has not been a confirmed case of boxwood blight in Michigan to date. However, since boxwoods are so common in our landscapes, it is important that gardeners, landscapers and nursery personal be familiar with this devastating disease. Several states that have been affected by boxwood blight have excellent resources available, including Virginia and Connecticut, as well as the American Nursery and Landscape Association (ANLA).

If you do suspect your tree has boxwood blight, send in a sample to MSU Diagnostic Services.