The winter 2014 went into the books as one of the coldest on record in Michigan. For many of us, the natural inclination was to write last winter off as an anomaly, never to be repeated anytime soon. Then came winter 2015. While winter 2015 is not exactly a carbon copy of 2014, it has the potential to cause as much damage to landscape plants as last winter.

To put some perspective on the past two winters, I dug into the weather records from the Michigan State University East Lansing Enviro-weather station to see how early 2014 and 2015 compared to recent history. Obviously not everyone in the state lives in the Lansing/East Lansing, Michigan area, but our central location makes us fairly representative of conditions elsewhere in the Lower Peninsula. I queried the records for the past 20 Januaries and Februaries since we don’t have data for this March yet, and those two months are usually our coldest. 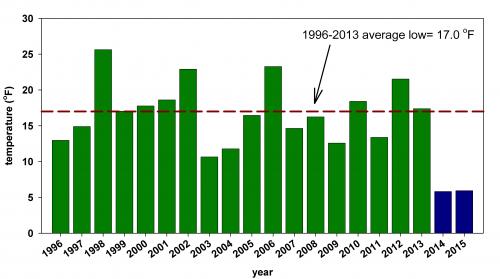 To gain some further insights on how this extreme cold weather might impact landscape plants, I compared the data on winter low temperatures with information on our USDA cold hardiness zone.

What is a hardiness zone?

The USDA hardiness zone map breaks the United States into zones based on average minimum winter temperature. That is, the coldest temperature we are likely to see each winter, on average, for a given location in the country. This is critical information for choosing landscape trees and shrubs since winter cold is one of the main determinants of where plants can survive.

The main zones are divided into 10 F increments with the coldest zone (zone 1) in northern Alaska and the warmest zone (zone 13) in Hawaii and Puerto Rico. The main zones are further divided into 5 F subzones. In Michigan, our hardiness zones range from 4a in the western Upper Peninsula and northern Lower Peninsula, to 6b in the southeast and along the Lake Michigan lakeshore. East Lansing, Michigan is in zone 5b (-10 to -15 F) (Figure 2). 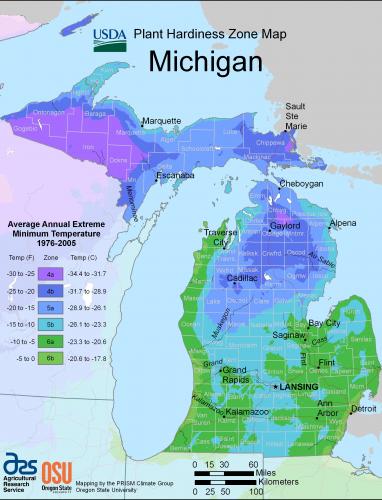 Number of nights in January and February with low temperatures below -15 F in East Lansing, Michigan during 1996-2015

So what does all of this mean for landscape plants? As with winter 2014, there is a high likelihood we will see widespread damage to trees and shrubs again from this past winter’s extreme cold. Key things Michigan State University Extension recommends looking for when inspecting your yard and landscape this spring will be branch dieback, delayed leaf-out or flowering and winter burn on conifers. In addition, mice, rabbits and deer have been feeding all winter long and are often the biggest contributors to landscape plant damage.

The experience of the past two winters also points out the importance of considering hardiness zones when purchasing landscape plants. There is a certain segment of the gardening population that longs for what they can’t have and likes to purchase plants that are rated as a zone warmer than their location. These folks are commonly referred to as “zone pushers” (you know who you are). For most of the past 20 years, zone pushers have gotten away with this behavior with impunity and many of their out-of-zone plants have survived and thrived during our string of mild winters. The winters of 2014 and 2015, however, have changed all this (Photo 1).

There is nothing wrong with zone pushing as long as gardeners acknowledge the risks. For most homeowners, however, sticking with plants that are rated for your zone will reduce the potential for disappointment down the line. To take the guesswork out of finding your hardiness zone, the USDA Hardiness Zone website has a “Find your zone” search that will identify your hardiness zone based on your zip code.