While milder weather and some moderation are expected in the short term, medium and longer lead forecast guidance suggests a general continuation of colder than normal temperatures.

A deep upper air troughing pattern persisted across eastern North America during late February 2014 into early March, leading to a continuation of severe winter conditions across Michigan and the Great Lakes region. One of the Arctic-origin air masses associated with the pattern led to extreme cold conditions on March 2 and 3, with minimum temperatures falling to the -15 to -30 degree Fahrenheit range, which were among the coldest readings observed so far this winter and, according to Michigan State University Extension experts, may have resulted in cold injury to overwintering vegetation above the snowline.

The cold weather has resulted in the most extensive ice cover on the Great Lakes since the winter of 1978-1979. As of March 7, 92.2 percent of the combined lake surfaces were covered, including almost complete coverage on Lakes Erie, Huron and Superior, and only a small area of open water left on Lake Michigan. Precipitation totals during recent weeks have fallen back to normal or below normal levels over most of the state, the result of mostly dry northerly or northwesterly low level wind flow (i.e., lack of Gulf of Mexico-origin moisture) and to the lack of lake effect snowfall.

An updated map of extreme minimum temperatures so far at over 230 sites across the state through March 5 of the current winter season is given in Map 1. The extremes range from -35 F or less in the western Upper Peninsula to -2 F at the airport in Holland, Mich. The second map (Map 2) depicts the timing of the extreme event as a calendar day. 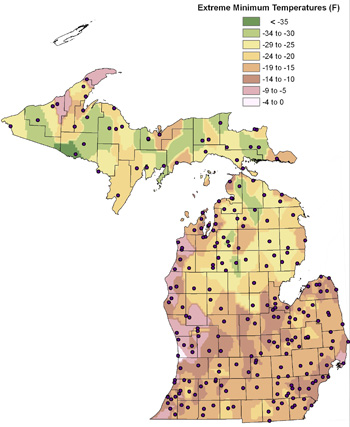 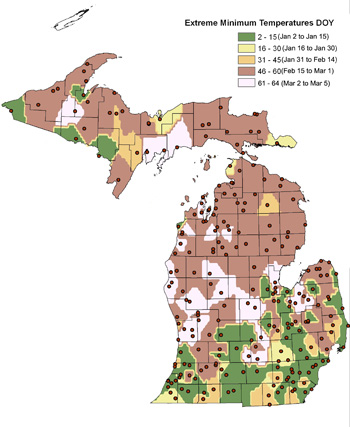 Virtually all of the extremes occurred in five major Arctic-airmass “events” in the region:

Some spatial patterns are evident. Many of these values across southern sections of the state occurred during the first event, in the third event across the north, and in the most recent event across central sections. During the first event in early January, the cold was accompanied by strong west to southwesterly winds. The southwesterly winds allowed some of the frigid air to move into extreme southern and southeastern sections of the state without passing across the still relatively open water surfaces of the lakes, resulting in colder temperatures across those areas (resulting in the pattern across southern Lower Michigan in Map 2).

For those interested in how this winter is shaping up relative to our historical record, preliminary climate data suggest that statewide mean temperatures for the December through February 2013-2014 period will average out at about 15 F or about 6.5 F below normal, which would put the season into the books among the five coldest on record. The current record for coldest December through February mean temperature is 13.5 F or 8 F below normal, which occurred during the winter of 1903-1904. In more recent times, the closest parallel is likely the winter of 1976-1977, which was 14.8 F on average and ranks third coldest on record.

Snowfall this year so far has also been heavier than normal in most areas, ranging from about 40 inches in some central and southern sections to more than 250 inches in the Upper Peninsula’s lake effect snow belts. The prolonged cold temperatures have allowed the development of an unusually deep snow pack continuing across the state, with depths at the beginning of March ranging from about 4 inches at a few locations in the eastern Lower Peninsula to more than 4 feet across snowbelt areas of Upper Michigan (Map 3). 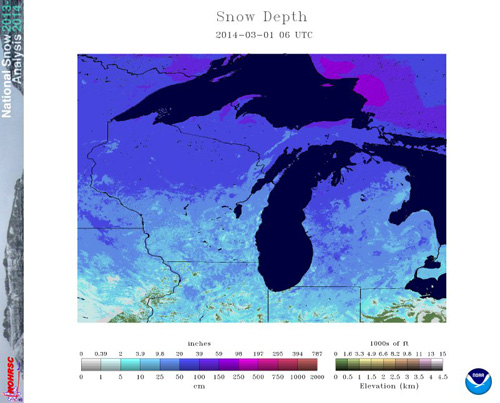 A related item of note is the extremely high levels of snow water equivalent in the snow pack (Map 4). Current values range from about 2 inches in the southeast corner of the state to 3-6 inches across much of Lower Michigan to 6-10 inches or more in lake effect snowbelt areas of northwest Lower and northern Upper Michigan. For some areas, like central and southern Lower Michigan, these values are near records. If we were to experience a rapid warm-up in the next few weeks, flooding could be a major problem; nothing like this is apparent in the forecast guidance at this point. 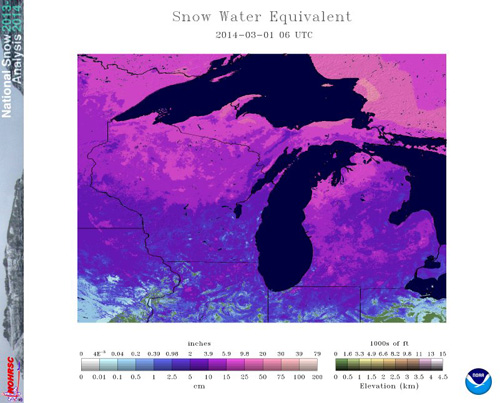 For much of this winter season, the medium range forecast guidance, which is very helpful in detecting general weather trends and pattern changes one to two weeks or more in advance, has called for a general continuation of the upper air pattern mentioned above. That trend is generally still in place, although latest medium range guidance does suggest some deamplification of the jet stream pattern across North America that should result in at least some occasional moderation of temperatures to more normal levels during the next week or two.

Given these outlooks and so much ice and snow still present in the region, the likelihood of an earlier than normal start of the upcoming growing season is declining rapidly.

Dr. Andresen’s work is funded in part by MSU’s AgBioResearch.

Be a smart gardener and protect lakes, streams and wetlands

Being prepared for a farm crisis

Should we be feeding transition milk to dairy heifer calves?