Plant pathology colleagues at CornellUniversity have shared research they have been conducting on brown root rot (Phoma sclerotioides), a disease that occurs on alfalfa in northern climates. Although this disease has not yet been reported in Michigan, it was recently confirmed in southern Ontario and Wisconsin. It is also found throughout New York, Vermont, New Hampshire, Maine, in the Northern Plains’ states and western Canada. Brown root rot symptoms above ground look like winterkill, and brown root rot has been found to be a major cause of poor winter survival of alfalfa. The disease is most severe in regions with harsh winter conditions. Because the disease grows slowly, it is more likely to be noticed in older stands than newer plantings.

How can you tell if what you are seeing is brown root rot? Root symptoms can be confused with Phytophthora root rot, but a molecular lab test has been developed that will let you know for sure. Brown root rot affects the roots and crowns of alfalfa when the plants are dormant, and is most active at 35-40°F. It produces characteristic root lesions that are visible in spring. The best time to check for symptoms and signs of brown root rot in your alfalfa fields is during April and early May, on plants that are alive, but showing slow re-growth of shoots from the crown. Dig up plants and wash the soil off the roots with clean water to look for lesions on the roots.

Phytophthora root rot infects both seedlings and older plants, while brown root rot seems to infect only older plants. The tap roots of older plants infected with Phytophthora have lesions that are reddish-brown, and water soaked, and root tissue remains intact. The outer tissue of roots infected with brown root rot sloughs off. Roots with brown root rot may also have small black, pimple-like fungal structures on the outer root tissue. Lesions can vary from large to small, and light to dark brown in color, often with a darker brown border. They may girdle the upper tap root or crown, resulting in winterkill, or the lower part of the root, reducing vigor, and slowing plant emergence in spring.

If you see the root symptoms, shown in the photo, on a high percentage of plants you examine in early spring, and see patches of winterkilled plants interspersed with patches of slowly emerging plants scattered across the field, brown root rot may be the culprit. The molecular laboratory test to confirm brown root is offered by Cornell University Plant Diagnostic Clinic for $40/sample. Contact the lab for further information before you submit samples for diagnosis at http://plantclinic.cornell.edu/ or by phone at: (607) 255-7850. 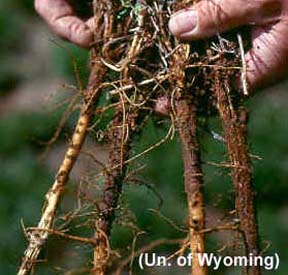 Brown root rot can survive as dormant fungal structures on crop debris and in dry soil for extended periods of time, and can be spread on machinery, by wind and by grazing animals. brown root rot is also known to infect bird’s foot trefoil, clovers and sweetclover, and grasses including winter cereals. Practices for managing brown root rot include rotation with non-host crops, avoiding excessive or late cuttings, providing appropriate fertility, and using varieties less susceptible to winter injury. The use of resistant genotypes is an effective means of managing brown root rot in western Canada, but not much is known about the brown root rot resistance of varieties that would be adapted to conditions in the Great Lakes region. Research is ongoing in the department of Plant Pathology and Plant-Microbe Biology at Cornell University by Dr. Gary Bergstrom and graduate research assistant Michael Wunsch to evaluate the relative resistance of alfalfa varieties that are adapted for New York growing conditions and to evaluate the relative susceptibility to brown root rot of perennial forage grasses grown in association with alfalfa.

Cover Crops as Forage: What to Consider