With the fall weather comes garden and yard cleanups. For those who are outside raking, they often discover the furry, black and rusty brown wooly worm. Most people have heard about how this little larva can predict just how bad the winter will be. But is this possible? Is a small larva able to do what the weather forecasters with sophisticated predicting equipment cannot? Let’s meet these insect experts.

Wooly worms or banded wooly bears are the larvae or caterpillars of the Isabella tiger moth. The larvae have rusty brown and black stripes on their bodies. The brown stripe is in the middle and both ends are black. This fuzzy caterpillar is currently found crawling on sidewalks and sitting on porches all over Michigan. 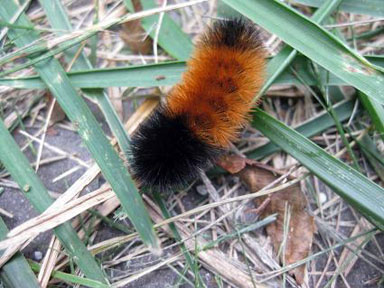 The story is that by looking at the stripes on the larvae, the amount of black determines how severe the winter weather will be. Wide black stripes mean a bad winter, whereas a wide brown stripe in the middle means a mild winter. The real wooly worm aficionados have even counted the body segments and determined that there are 13. They have additionally deduced that there 13 weeks of winter and that every black segment means one week of bad weather. But, alas, fiction is so much more entertaining than reality.

We have two generations of these striped larvae each year. The first hatches in May and second in August. The reason for those “predicting” stripes has everything to do with genetics and hatching conditions. Temperatures at hatching of the eggs can affect width of the rusty brown to black stripes. The genetics of the brood can also affect the coloration. There are some wooly worms that spend their entire larval life either being entirely brown or black. It now appears that sheer chance or dumb luck is involved when finding a larva. If finding several in the same area, they may be from the same brood and show similar coloration and will give the same prediction.

But the legend lives on about furry weather guys right outside the door, waiting to tell their stories of what winter has in store. And there are still plenty of people with lots of free time to hunt wooly worms and count segments. If it gives them some feeling of control in a chaotic world, it may be worth the effort. But still, listen to the local weather for confirmation that the wooly worms really know best.

Three festivals are planned each year in honor of the clever creatures: the Wooly Bear Festival in Vermillion, Ohio, the Wooly Worm Festivals in Banner Elk, North Carolina and in Lewisburg, Pennsylvania. And the myth continues on, all over the United States.

Recycle your fresh Christmas tree and protect against deer browse