In the last week, a couple weeds that have appeared and shown their colors are yellow hawkweed and black medic. Yellow hawkweed may look like dandelion to the untrained turfgrass eye, but there are some differences. Probably the most obvious difference between dandelion and yellow hawkweed is in the flower. Although there are still some dandelions flowering out there, generally dandelions flower earlier and also only produce one flower per stalk. In contrast, yellow hawkweed produces several flowers per stalk and appear in patches instead of as a single plant. This may facilitate the mowing around hawkweed patches that I often see; it’d be tough to mow around each individual dandelion plant. Yellow hawkweed’s presence is often an indication of poor growing conditions and is often found near roadsides, in boulevards, or in country lawns that are rarely fertilized. Although common broadleaf herbicides will be effective in control, if you don’t improve the growing conditions, it’s likely to be back.

Black medic is another weed that is coming on strong. Similar to yellow hawkweed, black medic is often found growing in low fertility, low maintenance sites. It often grows side-by-side with white clover. Just like the yellow hawkweed, fertilization will help turfgrass compete with black medic. Herbicides that contain the active ingredient clopyralid, fluroxypyr, and quinclorac are among the most effective for controlling medic, especially if applied when the medic is flowering.

If you can make it through the summer coexisting with black medic in your lawn, your best time for treatment is in the fall when the weeds are storing carbohydrates in their roots for next year. Herbicide applications in the fall are more readily transported to the roots and effectively kill the weed once and for all. 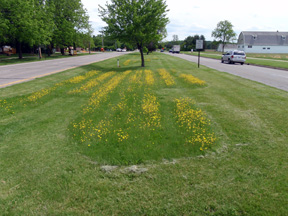