Defoliation has been observed in many tart cherry orchards across the region. The list of potential culprits causing this leaf drop is long, and we are still investigating the cause of defoliation in many blocks. 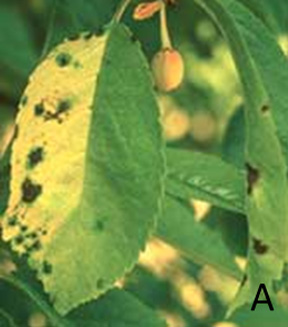 The next offender on the defoliation list is cherry leaf spot. This disease is notorious for dropping leaves; however, with good spray coverage and timing, leaf loss does not usually occur until sometime after harvest. With the loss of crop, growers may have stretched fungicide spray intervals and there was likely wash off with heavy rains early in the season. This scenario resulted in cherry leaf spot infections in May, and many of these early-infected leaves are now dropping from the tree. Photo 2 is a good example of leaves infected with cherry leaf spot. Be sure to flip over the leaf to look on the underside – the fungus will look white and slightly fuzzy. This characteristic will not be present on leaves with bacterial canker. 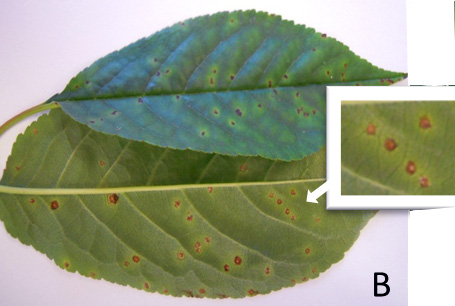 Cherry yellows is a viral disease that also causes tart cherries to drop their leaves. This classic, leaf-yellowing disease is caused by the prune dwarf virus. Defoliation is happening now and often occurs in waves throughout the season. The severity of leaf drop is temperature dependent at 30 days prior to defoliation, and cold temperatures result in increased development of later symptoms. Leaves that are infected by cherry yellows have a yellow and green mottling that is not in a distinct pattern (Photo 3). 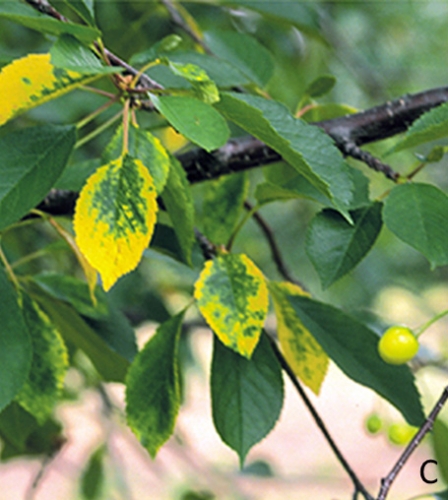 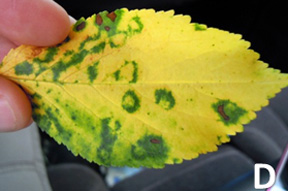 The last two potential causes of leaf drop this season are from phytotoxicity, caused by spray applications that are still under investigation. Growers have reported leaf loss after using dodine and copper products. We cannot conclude for certainty that these materials caused the leaf loss as it has not been consistent in all orchards. There may be secondary factors in blocks that caused leaf drop, such as temperature, humidity, slow drying time, fast drying time and other factors. Dodine has not been recommended for sweet cherries because of the potential for phytotoxity, and we have observed phytotoxity in Balatons in past seasons. We suspected that dodine phytotoxity in Balatons is a result of the sweet cherry parentage in this variety. Last season, growers observed phytotoxity in Montmorency, and the common denominator in those blocks appears to be the use of dodine (no photo available at this time). Leaves that are damaged from spray applications will eventually drop from the tree.

Lastly, we have some reports of phytotoxicity from copper products (Photo 5). Many growers that used copper in the 1960s remember the phytotoxity issue in tart cherries with copper use, as copper was one of the recommended fungicides for cherry leaf spot control. More recent data have shown that copper products are particularly effective against cherry leaf spot and provide excellent control at 1.2 lbs of metallic copper. However, the potential from phytotoxicity from copper use remains a concern for many growers, and this year we have evidence that suggests that some copper formulations can cause some leaf loss. But as mentioned above, we have blocks where copper was used and defoliation was a concern while other blocks received the same amount of copper product and resulted in significantly less leaf loss.

Until we further investigate this issue, growers should not abandon the use of copper products, particularly as those blocks that have used copper exclusively this season are some of the cleanest cherry leaf spot orchards in the region. Some of this phytotoxicity may also be related to the amount of lime used in a copper spray – many growers have reduced the lime in the spray tank as it is difficult to use. Reduced amounts of lime may have influenced the phytotoxicity in the copper applications.

A Pocket Guide for IPM Scouting in Stone Fruits (E2840)