The popular mobile market program is operating a second “van” that will serve several locations in the Muskegon area.

The YMCA of Greater Grand Rapids recently expanded their very popular Veggie Van operation to include a second Van that serve the Muskegon and lakeshore areas. According to Sara Vander Zanden, the Y’s Healthy Living Agriculture Manager, “We are expanding food access and nutrition education programs to Muskegon because of the disparity between the needs of the community and the services and resources available to many Muskegon residents. We were confident that the community would benefit from easy access to affordable, fresh produce, and the Veggie Van was the perfect fit.”

The YMCA selected thirteen initial locations that they are serving in the Muskegon area including two Mercy Health Locations, senior living apartments, Herman Miller Spring Lake, the Muskegon YMCA and many more (A full list of locations, times, and days of the week can be found on their schedule). The YMCA has already seen their expansion paying off with over $3,000 in sales during their first week, doubling the average weekly sales from their Grand Rapids van.

Veggie Van began three years ago in Grand Rapids as a way to bring fresh local produce to areas of the city that with inadequate access to grocery stores or farmers markets. These areas are commonly referred to as Food Deserts, urban neighborhoods and rural towns without ready access to fresh, healthy and affordable food. The YMCA identified a mobile market as a way to overcome obstacles such as lack of adequate transportation or other barriers to accessing fresh food markets. Rather than trying to get underserved populations to fresh food markets, the YMCA decided to take the market to them. 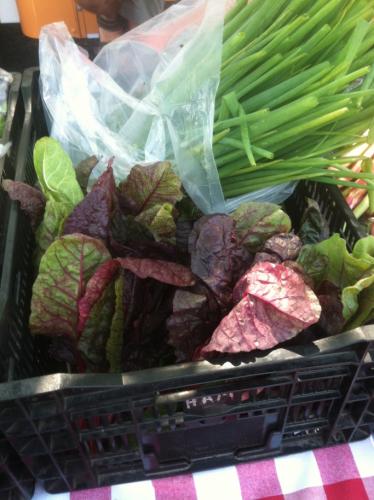 The Veggie Van currently serves over twenty-one locations in the Grand Rapids area including, local businesses (Steelcase and Bissell), senior homes and centers, public libraries, and many more (View the full Grand Rapids Veggie Van schedule with days of the week and times of day). When the Veggie Van arrives at a site, they set-up their “mini-market” complete with fresh fruits and vegetables from several local growers as well as a few prepared/value-added foods such as hummus, muffins, and salsa. Not only are these products offered at a discount price compared to traditional grocery stores, but the Veggie Van also accepts several forms of Supplemental Nutrition Assurance Program (SNAP) benefits. These include traditional Bridge Cards, WIC Project FRESH, Senior Project FRESH/Market FRESH, WIC Cash Value Benefits, and Summer EBT for Children. The Veggie Van also participates in the Double Up Food Bucks program which provides an additional dollar to spend on Michigan agricultural products for every one dollar spent on an EBT card. For a list of items currently available for purchase on the Grand Rapids and Muskegon Veggie Vans, visit their website. This site also allows you to place advanced orders for pick-up at your closest mobile market location (Links to location schedules for Grand Rapids and Muskegon above).

While the Veggie Van offers a whole array of fresh fruits and vegetables that would be found in a traditional produce section of a grocery store, they source as much of their produce from local Michigan growers whenever possible. They are currently looking for more growers to fill orders in the Muskegon and Grand Rapids areas. A benefit to the producer of selling produce to the Veggie Van is that everything they purchase is bought and paid for up-front, regardless of whether or not it is sold by the Van. If you would like more information about selling to the Veggie Van, are interested in hosting a mobile market site please contact Sara Vander Zanden at svanderzanden@grymca.org. The Muskegon Veggie Van is made possible through the generosity of Blue Cross Blue Shield, Herman Miller Cares, and the Muskegon Community Foundation.

For more information on alleviating food deserts through mobile markets in your own communities visit the Michigan State University Extension Community Food System page and search for Extension Experts in your county.