Phomopsis dieback of young canes is common in blueberry fields. Prune out diseased canes and use effective fungicides to protect new growth.

Many blueberry fields in Michigan have been hard-hit by the low temperatures this past winter. Typically, the oldest canes are dead and fruit set may be poor. However, more recently, one- and two-year-old canes have started dying, showing wilting leaves and brown discoloration of stems. Often multiple canes per bush are affected and there may be a mix of dead and dying canes. This is probably the earliest in the season that we have seen “flagging” and dieback, especially of younger canes. When you look closely, you may see brown lesions (cankers) somewhere along the cane, often centered around old leaf scars or moving in from dead twig stubs. Cankers can expand in both directions from the point of infection, although they tend to move downward more quickly. From superficial infections in the bark, the fungus progresses into the vascular system and then girdles the stem, at which point the portion of the cane above the canker dies for lack of water, hence the rapid wilting of leaves.

Symptoms are most common in Bluecrop, Jersey and Berkeley fields, especially those that had vigorous new shoot growth last year and the year before. Blueberry bushes tend to push a lot of new growth after winter injury or heavy pruning. There may also be a link with aerial fungicide application, which may provide inferior fungicide coverage of the base of the bush where these infections are taking place, particularly later in the season when the canopy is full. The good news, if there is any, is that this is a cane disease and the bush has the ability to renew itself once diseased canes are removed.

While we are still trying to determine the causal agent of the outbreak, the fungal pathogen Phomopsis appears to be the likely culprit, possibly in conjunction with secondary fungi that move in after Phomopsis. In surveys in Michigan blueberry fields in recent years, the fungus Phomopsis vaccinii was the most common pathogen found in dying canes. While cultivars Jersey and Berkeley are known to be rather susceptible to Phomopsis, cultivar Bluecrop is generally considered resistant. However, we discovered in inoculation experiments that current-season growth of Bluecrop is highly susceptible to Phomopsis infection, much more so than in Jersey and Elliott. This phenomenon has also been observed in field situations, where new growth of Bluecrop was repeatedly infected to the point that bushes were not able to outgrow the disease and remained small. 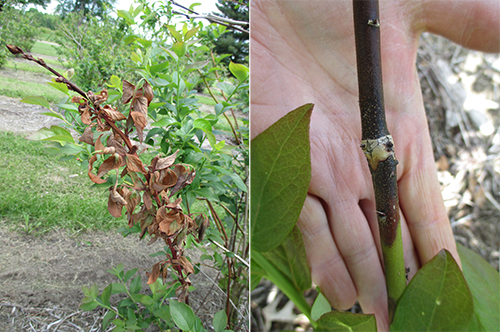 The big question is when these infections took place. My best guess is they happened last year (2014) during rainy periods in mid- to late summer or even early fall. Symptoms on two-year-old canes suggested a similar scenario in 2013. Both summers were cool and relatively wet in comparison to 2012. Phomopsis overwinters in old, infected canes and twigs, which are a ready source of inoculum hovering over the new growth. Phomopsis spores are splash-dispersed by rain and irrigation water. While peak spore release usually occurs in April and May, the fungus may be active all summer into early September, even producing a second crop of spores later in the season on newly infected twigs. Rapidly growing new shoots are very tender and susceptible to infection by Phomopsis, especially at moderate temperatures (68-75 degrees Fahrenheit) with extended wetting periods (48 hours or more). These conditions can occur during several consecutive rainy days. Over-fertilization can also contribute to excessive growth. Such canes may not harden off properly and be damaged during early fall freezes, which could also predispose them to fungal infection. Mechanical harvesting can wound canes, allowing fungal pathogens entry. In addition, herbicide drift injury, such as from glyphosate or paraquat, can weaken young canes and predispose them to Phomopsis infection. The blueberry cultivar Duke appears to be especially sensitive in that regard. 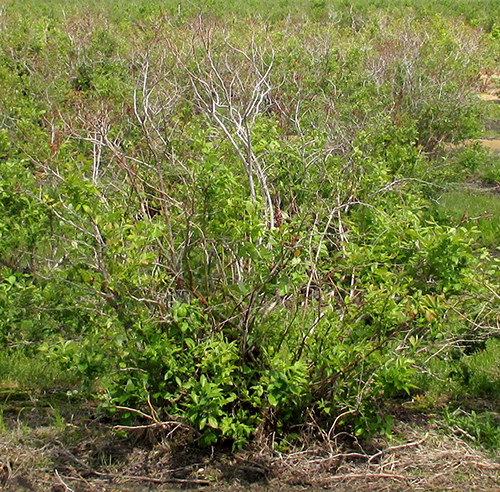 So what are the management options? It is important to prune out infected and dead canes as soon as possible as they are or may become a source of spores that will be raining down on new shoots. It is best to cut canes well below the lesions and close to the ground. Michigan State University Extension recommends pruning during dry weather to prevent new infections from occurring, especially on fresh pruning wounds. Also, try to remove canes with gray or tan-colored blotches where spores are most likely produced. Burn or bury canes to destroy the inoculum. If you can’t collect them, chop them up into small pieces with a mower to speed up decomposition. Limit nitrogen, including foliar fertilizers, so as not to encourage lush cane growth.

As soon as possible after pruning, apply an effective fungicide with ground equipment to protect young canes and pruning wounds from infection, ensuring the lower part of the bush is well-covered. If you are applying sprays for fruit rots anyway, keep a nozzle aimed at the base of the bush. As for fungicide options, Pristine (zero-day pre-harvest interval or PHI) and Quash (seven-day PHI) would probably be the most effective. Indar, Tilt and QuiltXcel are also effective, but have a 30-day PHI. Aliette, or other phosphite material, or Ziram could also be used, but are not as strong. The best options for organic growers are Sil-Matrix, Serenade and Double Nickel 55, which are expected to provide moderate protection.

Make sure to read the fungicide labels for the pre-harvest and restricted entry intervals and other restrictions. Follow-up fungicide sprays may be helpful during rainy periods in August and early September to continue to protect new growth. In late fall or early spring, apply Sulforix, Lime Sulfur or Sulfur 6L as a dormant spray to eradicate overwintering inoculum. You may have to follow this procedure two years in a row to gain control over the problem.

Susceptibility of canes of different ages to Phomopsis vaccinii in cultivar Bluecrop. 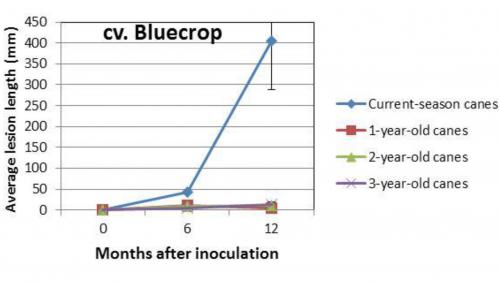