The mission of the School of Packaging at Michigan State University is to educate packaging professionals and to create innovative solutions that enhance or maintain product quality, increase efficiency and reduce waste. In doing so, we contribute to the economic development and quality of life of citizens within the State of Michigan and across the world through highly relevant educational experiences and cutting edge research.

In the Fall of 1952, Packaging as an academic discipline was created at Michigan State University in the Department of Forest Products. The Packaging program was science and mathematics based with strong components in business, sociology and psychology. The first Bachelor of Science degree in Packaging was awarded in March 1955.

Since its beginning in 1952, the School has conferred over 10,000 degrees. Today we have over 650 undergraduate and 30 graduate students.

The School of Packaging has been involved in international activities since its beginning. International students seek admission into our graduate program from all over the world. More than half of our graduate students are international. After finishing their education, most international students return to their native countries and become leaders in their packaging industries. Our faculty travel extensively serving as consultants and participating in programs throughout the world. We have alumni chapters in many countries outside the United States. 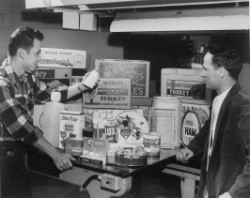 im Goff (right) with a student

The School of Packaging continues to be a dynamic, ever-changing organization that responds to the needs of people.

In 1957, the MSU Board of Trustees separated the Packaging curriculum from Forest Products and established an independent School of Packaging. Industry assistance and advice were instrumental in the development of the School and remain so today.

By the late 1960s, enrollment had risen to about 300. Enrollment peaked at 1,000 students in 1981 and has since been restricted. In 1964, the original Packaging Building was completed with funds from corporate and private donors. Major additions to the building were completed in 1986, also through corporate and private donations. This resulted in a major improvement in the facilities and helped to accommodate a higher level of research.

From the mid-1960s to the late 1970s, the School began to develop significant research expertise and earned national and international recognition in physical distribution and protective packaging. The School continues to enjoy a worldwide reputation for leadership in this area with computer applications in cushion design, fragility assessment, distribution dynamics and modeling of the physical environment. Building on efforts related to water vapor permeability in the 1960s and expansion of the faculty in the 1980s, the School became known as a leader in the areas of permeability and migration, shelf life, food packaging, product/package compatibility, tamper evidence and legibility. These programs all continue today. In 1980, the School initiated an overseas study program in London, which was followed a few years later by a program in Lund, Sweden. In 1994 a program on packaging in Japan was added. Students from packaging programs across the United States participate in these courses. In the early 1980s, the School began to develop its outreach program. Efforts in this area have grown substantially and are an important part of our total program. The MSU School of Packaging is the leader among universities in lifelong education in packaging.

New research projects in the 00s include;

Books written by faculty in the 00s:

Books written by faculty in the 1990s:

Books written by faculty in the 1980s: 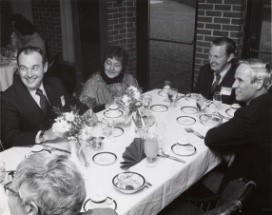 The packaging major officially became The School of Packaging in 1957 with Dr. Panshin as Director. There were now 139 students enrolled.