What’s happening to my tomatoes? 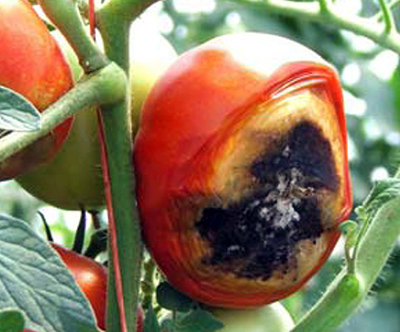 Home gardeners become distressed when they notice that a dry, sunken decay has developed on the blossom end of the tomatoes in their garden. This can happen especially on the first tomatoes of the season that have been carefully nurtured or after an extremely dry period in the summer. This is a disorder known as blossom end rot. Less frequently it occurs on peppers and eggplant.

Blossom-end rot first appears as water- soaked spots on the blossom end, or bottom, of the tomato. The affected tissue breaks down rapidly and the area becomes sunken, dark brown or black, and leathery. This can happen at any time as the tomatoes mature, and most often on the first tomatoes of the season.

Blossom-end rot is caused by insufficient calcium in the tissue of the tomato. Calcium is taken up into the plant through the roots, however, it settles in one part of the plant. This means that the rot can occur even when there is an ample supply of calcium in the soil, stems or leaves. Actively growing parts of the plant such as developing tomatoes must have a continuous supply of calcium to prevent these spots from developing.

The conditions that cause blossom-end rot are closely linked to inconsistent soil moisture throughout the growing season. Since calcium is only moved into the plant with an ample moisture supply, when drought occurs the fruit continues to develop but will be affected by a calcium deficiency.

Rapid early growth of the plants can cause the rot because the calcium is needed by the tomatoes when they are actively growing and the plants may not be able to take up sufficient calcium quickly enough through the roots.

Although it is difficult to wait for those first ripe tomatoes from the home garden, it is important not to force the plants to grow too quickly to avoid this rot.

Root damage can also lead to decreased moisture intake. Cultivating too close to plants or burning them with fertilizer can reduce nutrient and water uptake through the roots. Waterlogged soils also interfere with the root’s ability to take up nutrients.

Garden soils may also have low levels of calcium. This can be determined by soil testing and can be corrected by adding lime as recommended on the soil test report (order a soil test kit). Do not add lime without having your soil tested first. 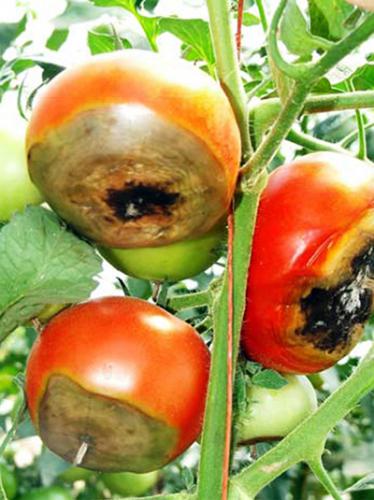 Grow tomatoes in well-drained soil high in organic matter with a soil pH between 6.5 and 7.5.

Apply fertilizer and lime as recommended by a soil test. Use fertilizers low in nitrogen, but high in superphosphate, with numbers similar to 4-12-4 or 5-20-5; this will reduce the chances of blossom-end rot.

Avoid deep cultivation around the plants as much as possible after fruit set, especially in dry weather. Scraping the soil lightly with a hoe is usually sufficient to control weeds in the home garden.

Maintain a consistent supply of soil moisture. During the growing season, especially as the fruit is developing, tomatoes need at least 1 inch of water per week, supplied as rainfall or irrigation. Watering with a soaker hose is preferable to overhead irrigation in the home garden.

Mulching tomatoes helps to conserve moisture in the soil. Use organic mulches such as straw free of weed seed, grass clippings, peat moss or wood chips.

Infected fruit should be removed when first noticed. This rot does not spread from plant to plant or from fruit to fruit, so even if it occurs on your earliest tomatoes, it may not affect later tomatoes on the same plant. Fungicides and insecticides are useless as control measures for this disorder.