Soil compaction, soil layering and excessive thatch buildup are common problems on home lawns in Michigan. These conditions do not allow adequate water movement into the soil, drainage of water through the soil profile, adequate oxygen in the soil or easy root growth. The results are shallow rooting, inefficient water use and poor turf health.

Cultivation (also called aerification) is the process of physically modifying the soil by removing plugs from the soil profile. There are several types of specialized equipment designed for this procedure. The most common include those with hollow tines that remove a core of soil. Others have solid tine spikes that punch holes into the soil. 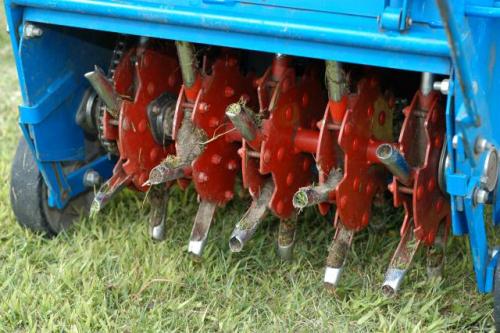 Soil compaction is the result of soil particles being pushed together. It severely reduces the air spaces in the soil. Maintaining air space in the soil is important for water drainage and oxygen exchange for turf roots. Compaction problems are most severe in fine-textured soils (high clay content). Severe compaction can result when these soils are subjected to high traffic. This is a common problem where turf is established on subsoils excavated from basements during the house construction process. Soils containing a higher sand content are more resistant to compaction, but heavy traffic can still compact these soils. Soil layering occurs when different soils are stacked one on top of another. This condition results in poor water movement between layers and inhibits root growth into the lower soil layer. This also occurs when subsoils excavated from basements are placed on the surface, then a shallow layer of topsoil is placed on top of the subsoils. This problem is also evident when sod is placed directly on very fine- or very coarse-textured soils.

Under these conditions, cultivation techniques can improve water infiltration and increase the air space. This procedure will provide for better rooting, which will allow the turf to be more resilient and better tolerate traffic, drought stress, and weed, disease and insect pressure. 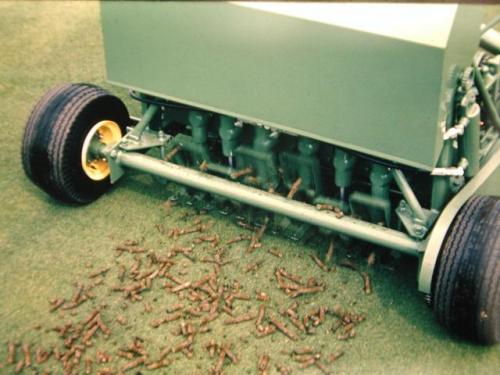 A hollow-core aerifier removes soil plugs from the turf.

Thatch is the accumulation of dead and decomposing turf stems, leaves and roots intermixed with live plant roots. Clippings do not contribute to thatch buildup. Clippings decompose quickly and should be returned to the turf. Thatch is the brown layer between the soil surface and the green top growth. A thatch layer of approximately 1/2 inch is beneficial because it acts as a buffer at the soil surface and protects the plants from weather extremes. Thatch that builds up over 1 inch, however, can inhibit water and air movement and eventually weakens the turf stand. The thatch layer is home to a variety of microorganisms that are responsible for its decomposition. A buildup of thatch occurs when it is being produced faster than it is being decomposed. Some grasses, such as Kentucky bluegrass, accumulate thatch faster than others. Compacted soils and overwatering also encourage thatch formation. Effective thatch control requires an integrated program combining proper grass selection, irrigation, fertilization, and timely cultivation and dethatching. 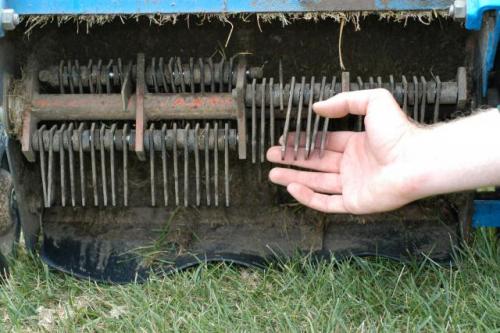 There are several types of cultivation tools. MSU research indicates that using a machine that removes a core of soil is more effective than those that slice or push holes into the soil using solid tines. For hollow tine machines, the combination of tine size and spacing will determine the amount of soil that you can remove. Tines at least 1/2 inch in diameter should be used. Larger tines are suggested for more severe compaction or thatch problems. As a general rule, there should be a hole every 3 inches and you should aerify between 4 and 6 percent of the surface area (see table below). Wide tine spacing and small tine diameter have little effect on a turf. For example, compare an aerifier in the table below that has a 2- by 2-inch spacing with one that has a 4- by 6-inch spacing. It would require six passes with the latter to achieve the same number of holes as one pass with the closer spacing.

Generally, the deeper the cultivation, the better. As a minimum, we suggest 2.5 inches. Let’s say a thatch layer of 1.5 inches exists on a site and the tines reach only to a depth of 2 inches — only 1/2 inch of soil will be brought to the surface with each tine. Considering the low percentage of area affected (see table), this activity will have almost no impact on mixing soil with the thatch, regardless of the number of passes.

For many bluegrass lawns, one cultivation per year is adequate. If there is a significant thatch layer (1 inch or more) or the area is severely compacted, two or more cultivations per year will be beneficial. When it becomes evident that the thatch has been reduced to less than 1 inch and the turf is rooting well into the soil below, the frequency of cultivation can be reduced to annual treatments. The degree of compaction, soil conditions and the use of the turf will determine how frequently cultivation will be needed.

The cultivation process will cause some injury to turf. Fertilizing approximately a week before cultivation will increase the growth rate of the grass and promote quick recovery. Cultivating during spring or fall is most desirable because the turf will recover quickly. Many cores will be left on the lawn after the operation. These cores can be broken up by dragging a mat over the lawn to sift the cores back into the turf. Seeding the lawn after a cultivation procedure is a very effective way to introduce more desirable grasses.

For best results, pay attention to the moisture content in the soil when cultivating. Soil that is too dry will not allow the tines to penetrate adequately. Wet conditions may cause unnecessary damage to the turf.

Effect of Tine Diameter and Spacing on Percent of Area Affected