Oak, maples, alder, willow, poplar, apple, hawthorn, elm and linden. However, many plants, including some conifers, are eaten. 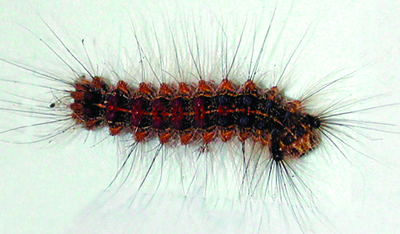 Young larvae are dark with irregular yellow marking on their backs and a black head capsule. As larvae mature (fourth to sixth instars), they develop 5 pairs of blue spots and 6 pairs of red spots on their backs.

Look for larvae to hatch in late April to early May as Bradford pear or Amelanchier are blooming. Larval development takes about seven weeks. Females are creamy white with a wingspan of about 2 inches; males are brown with darker bands. Females cannot fly — they call in males with pheromones, mate, and lay eggs near their pupation sites. Egg masses are laid in July to August. 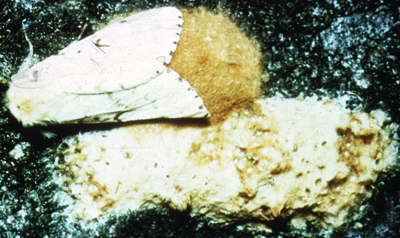 Gypsy moth overwinters in the egg stage in an egg mass laid on the tree and covered with a dense patch of hairs. The buff-colored egg mass under the female moth is new; the lighter-colored mass on the bottom is an old egg mass (from the previous year).

When using insecticides to manage gypsy moth, target young larvae. Although the caterpillars can be a nuisance, insecticide sprays are not necessary to protect trees if there is less than 30 percent defoliation. 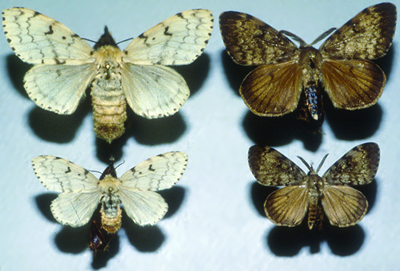 Pheromone traps can be used to time the emergence and flight of adult male gypsy moths. Look for and destroy egg masses in late summer and fall. Gypsy moth has many natural enemies, including predators, parasitoids and pathogens. NPV (a virus), shown infecting the caterpillar in the photo, may cause a significant drop in populations within a couple of years of an outbreak. 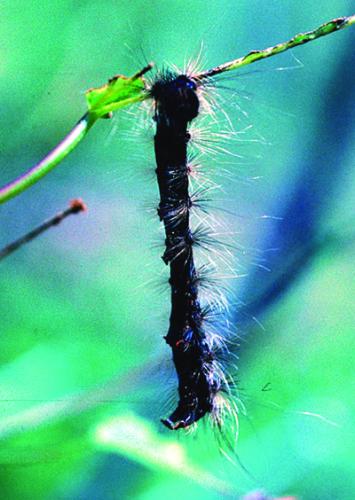 Moths pupate in protected sites, like under loose flaps of bark or on woodpiles. Adults emerge after pupation (about 10 to 14 days) beginning about mid-July to mate and lay eggs. (left). Larva infected with NPV (nuclear polyhedrosis virus) (right).

Print a PDF of this page: Gypsy moth