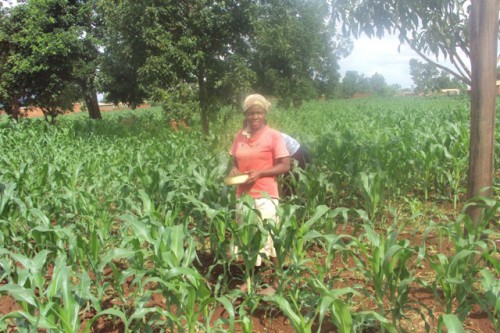 Despite immense efforts by the Government of Malawi (GoM), in investing in fertilizers through the Farm Input Subsidy Programme (FISP) since the 2005/06 farming season, agriculture in Malawi continues to be characterized by low productivity. This is due to several reasons, including: high soil degradation, poor land management and farming practices, and use of low quantities and quality of fertilizers. This has been exacerbated by continuous use of the same pieces of land without fallowing or crop rotation, mainly due to high population pressure on the land.

The draft National Fertilizer Policy (NFP) defines the vision for developing the fertilizer industry in Malawi to increase affordable and profitable access to high-quality fertilizer products for all farmers over the next five years.

New research from Department of Agricultural Research Services (DARS) indicates that there is a need to advise stakeholders including farmers, on the right fertilizers for different geographic areas of Malawi, based on results of soil testing and mapping and abandon the blanket fertilizer recommendation the Ministry of Agriculture, Irrigation and Water Development (MoAIWD) has followed since 1975, with limited agricultural productivity results.

It is with the above background that the MoAIWD with financial and technical support from the United States Agency for International Development (USAID) through the New Alliance Policy Acceleration Support Project (NAPAS: Malawi) organized the much-awaited regional stakeholder consultations on the zero-draft NFP.

In her opening remarks, in Mzuzu, Chief of Party (COP) for NAPAS: Malawi, Flora Nankhuni said that, “agricultural productivity is very low partly due to increasing population pressure in that, as a country, we mine the same piece of land over and over again, and this creates problems on the quality of the soil.”

During the consultations, several critical issues emerged, including: soil health; soil testing and analysis to determine soil fertility status including soil pH, which measures the level of acidity in the soil and micronutrient composition of the soil. Lack of agricultural extension and advisory services on soil health issues also came out strongly. Alliance for African Partnership Director at Michigan State University, Professor Richard Mkandawire, commented that the agenda on fertilizer should speak to larger challenges of soil health, because Malawi’s soils are the most depleted in the region. He further commented that Malawi is well positioned in leading the growth of the fertilizer sector because the per capital consumption of fertilizer is much higher than many countries in the region and it is therefore, critical that the fertilizer policy framework begins to inform the future direction of the fertilizer industry.

The NFP is aligned to the National Agriculture Policy (NAP) and envisions that by 2022, agriculture in Malawi will increasingly be commercially oriented through specialization of farm production that uses soil- and crop-specific high-quality fertilizer products in order to achieve sustainable agricultural production and productivity as well as farm output diversification at the national level.

The process of developing the Policy started in November 2015 with DARS convening the first consultation with researchers, private sector and other stakeholders in the fertilizer industry. In addition, one-on-one consultations were done with 32 private sector stakeholders between June and July 2016 and with 115 community stakeholders from several districts in all the regions of Malawi between April and May 2016. The Civil Society Agriculture Network (CISANET) joined NAPAS:Malawi in supporting the ministry to conduct the community consultations.

From these inputs a zero draft of the policy was produced. The draft is now being revised and is expected to be validated in November 2017 before being submitted to the Office of the President and Cabinet (OPC) for approval, by December 2017.