Energy Use in Michigan

Before we begin to consider the role of renewable or alternative energy, it’s a wise idea to better understand our current energy picture. The vast majority of our energy in Michigan comes from fossil fuel sources: petroleum, natural gas, and coal (in that order₁). Michigan also produces some energy from nuclear plants. Together, these four sources make up about 97 percent of our supply. Many people are concerned about fossil fuel consumption. Fossil fuel quantities are limited, and although we are not likely to run out in the near term, we have seen spikes in prices that are of great concern. Also, fossil fuel use contributes to the debate on climate change. 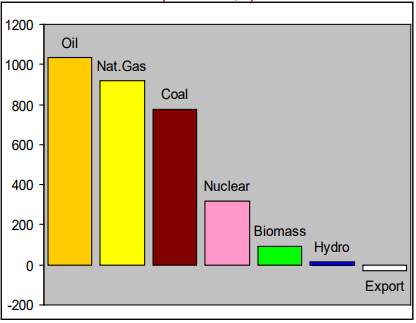 It is clear that the combined sum of renewable sources--woody biomass, agricultural products (food and non-food), wind, solar, hydro and ground heat--will not be able to replace all of the energy that we currently consume. ). Michigan also produces some energy from nuclear plants. Together, these four sources make up about 97 percent of our supply. Many people are concerned about fossil fuel consumption. Fossil fuel quantities are limited, and although we are not likely to run out in the near term, we have seen spikes in prices that are of great concern. Also, fossil fuel use contributes to the debate on climate change.

Conservation and efficiency will be key elements of an energy strategy, together with foreseeable future technology. Each Michigan resident consumes about 300 million BTUs each year, with the state ranked No. 4 in per capita consumption across the United States.₂

Why bother with alternatives to fossil fuels? Some of the reasons have already been mentioned: fossil fuel supplies, increasing prices, and possible impacts on climate change. Additionally, most of the dollars spent on fossil fuels leave Michigan to regions where fossil fuels are produced (coal regions, other states, other countries). Using Michigan energy sources, such as wood, keeps more money local and particularly benefits rural economies across the state. Woody biomass is one of Michigan’s largest potential sources of renewable energy.₃

Energy consumption can be distributed into three main categories: transportation, electricity generation, and space heating. The main source of energy in each application varies. For example, electricity in Michigan is generated primarily from coal, with significant amounts from nuclear plants and natural gas. Transportation energy comes almost entirely from petroleum. Michigan uses large quantities of natural gas for home heating.

As we consider woody biomass, we must also consider which current energy source can be most easily replaced. Wood can be used for heat, which largely offsets natural gas consumption. Wood can also be used to generate electricity, which would replace some of our coal use. Combined Heat and Power (CHP) plants, which deliver both heat and electricity to a local consumer area or district, offer the most efficient use of wood (or any feedstock) in terms of efficiency for heat and power. Currently, the majority of biomass feedstocks are used by the industrial sector.

Wind and solar are other commonly considered alternatives to produce electricity that could partially replace coal consumption. Another nuclear plant would work in a similar manner. Use of alternative energy can either replace existing feedstocks or add to current capacity.

As a case study in renewable energy and consumer use, consider the electric car. If these cars use electricity derived from renewable feedstocks, from efficient power plants, the reduction in petroleum consumption would likely result in an overall reduction in greenhouse gas emissions. If electricity consumption from electric cars would result in burning of additional coal, then the cars may have the opposite effect.

As Michigan’s bioeconomy grows, we need to consider the strategies that best take advantage of Michigan resources and Michigan consumption patterns. Better understanding the impact of energy consumption patterns, sources of various forms of energy, and the best ways to use local resources would contribute to a more stable and sustainable energy economy. 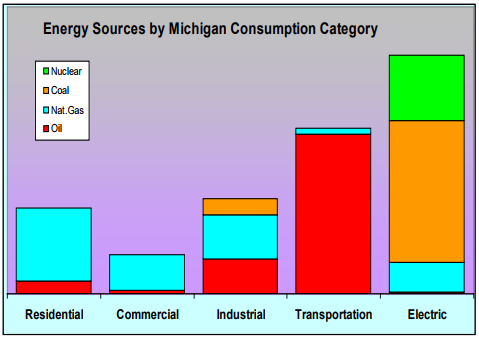 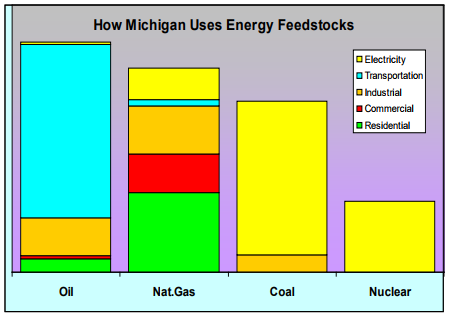