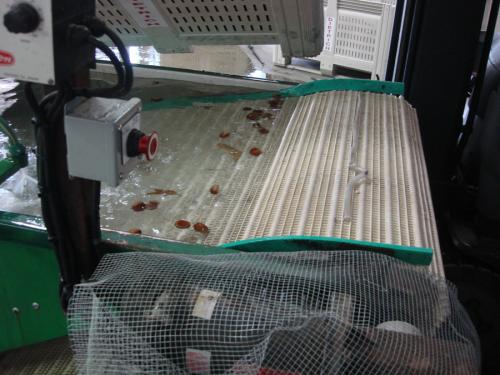 Several treatments have been evaluated for their impact on the quality of fresh chestnuts during storage. Some were unable to prevent the growth of storage molds while others have shown promise in preventing the growth of storage molds and to minimize postharvest decay, including 30-ppm iodine, 250-ppm carbendazim, 100 to 200-ppm sodium hypochlorite, 100-ppm peracetic acid, 50-ppm natamycin, 1% sorbic acid, 1% propionic acid, hot water dip at 90°C for 10 min and immersion in fungicides including 2,6-dichloro-4-nitroaniline (Botran®). The immersion in 15°C water for 15 min, 45-48°C water for 15 min and 52°C water for 5, 15, 30 or 60 min significantly reduced both the percentage of infected nuts during storage and the percentage of chestnuts exhibiting insect damage from the presence of larvae of Cydia splendana, Curculio elephas and Curculio sayi. Various treatments can reduce both microorganisms and insects, but some of these treatments, such as immersion in 52°C water for 60 min can negatively affect chestnut quality. 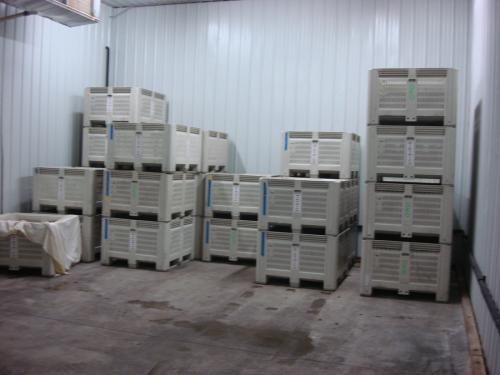 Improved food processing treatments and management practices can be used to enhance the safety, storage and shelf life of various commodities. These strategies have not been evaluated in fresh chestnuts. These materials primarily involve various sanitizers such as hydrogen peroxide, ozone, chlorine dioxide (gas and solution), hypochlorite, organic acids, natamycin, with and without heat and other compounds.

Chestnut growers in the USA are known to immerse harvested chestnuts in a 100 to 200 ppm chlorinated water bath to reduce contaminants and microbial populations before storage. However, preliminary research indicated that the efficacy of this compound is not only limited, but might have unpredictable side effect. In recent years, health and environmental concerns have arisen over the continued use of chlorine due to its reactivity with some food constituents to form toxic by-products. Thus, with the actual regulations for chemical use and possibility of future regulatory constraints on the use of chlorine as a sanitizer, alternative treatments are being sought to improve the microbiological quality and safety of agricultural commodities. 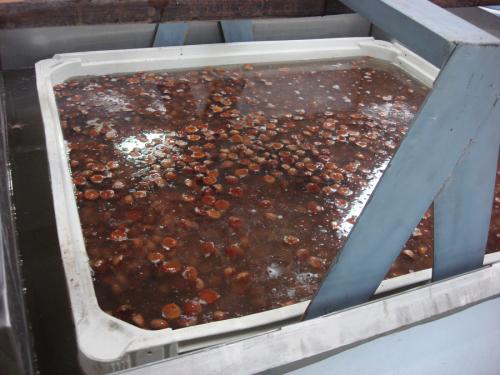 The objective of this study was to evaluate the effectiveness of sixteen postharvest treatments on microbial quality of fresh Michigan chestnuts. In this study, microbial quality included the reduction of shell mold severity, kernel decay incidence and weight loss during commercial cold storage.

This study identified several compounds that may inhibit the growth of microorganisms responsible for postharvest mold and kernel decay of chestnuts. Among these, hydrogen dioxide in combination with peracetic acid, a commercially available product known as Storox™, significantly reduced postharvest mold and decay of chestnuts. Other compounds with the potential to inhibit internal decay included ozone, chlorine dioxide gas, peracetic acid (Lenntech™) and sodium metabisulfite. The prospect of commercially and economically using these compounds as postharvest treatments needs to be further examined for potential advantages over conventional chestnut production practices. Efficient application and monitoring will need to be developed and examined for these new microbial reduction strategies to maximize product coverage and efficacy. Governmental regulations in combination with these results suggest that hydrogen peroxide in combination with peracetic acid (Storox™), could be adapted by chestnut producers, to better reduce postharvest mold and kernel decay.