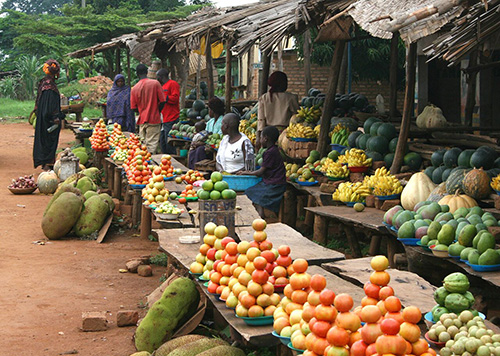 What is food security?
The final report of the 1996 World Food Summit states that food security “exists when all people, at all times, have physical and economic access to sufficient, safe and nutritious food to meet their dietary needs and food preferences for an active and healthy life.”

A family is food secure when its members do not live in hunger or fear of hunger. Food insecurity is often rooted in poverty and has long-term impacts on the ability of families, communities and countries to develop.

Food security old and new challenges
World population is growing fast, and cities continue to expand. For example, the population of sub-Saharan Africa (SSA), a continent with most acute challenges of food insecurity, is projected to double from 0.95 to 2.1 billion people between 2015 and 2050. 62% of Africans are below the age of 25. Africans between 15 and 35 now account for 55% of the region’s labor force. In sub-Saharan Africa, urban population is reaching up to 52% in 2016.

Food systems are undergoing rapid transformation. There is a deep transformation occurring in sub-Saharan Africa [1] and other parts of the developing world towards high-value products, processed foods, and modern supply chains. The increasing demand for such food stresses the agri-food system [2] at all levels, from production to consumption.

There is a continuing degradation of natural resources driven by a combination of population pressure and outdated agricultural practices. This situation is exacerbated by climate change which impacts food production with more variable and uncertain agricultural output and prices, negative effects on human and animal health, and flood damage to infrastructure

The double-burden of malnutrition: Undernutrition has dramatic effects on child growth and development. As of 2015, an estimated 156 million children under 5 years of age are suffering from its consequences (stunting) [3]. Undernutrition has been a long-lasting issue, mostly in Africa and Asia. Prolonged undernourishment stunts growth, slows cognitive development and increases susceptibility to illness. At the same time, in these countries, another form of malnutrition is increasingly developing with diet change (too many calories from sugar and fat) that results in overweight and associated diseases.

Policies for food security
Policies regulate socio-economic practices and can have either positive or negative effects on social and economic development. Policies can be powerful mechanisms to channel income from one group to another in response to vested interests. They set a context for strategic public investments, either enhancing or stifling their benefits. Understanding the political economic context and institutional constraints is critical to the successful design and uptake of policies and reform processes.

Researchers have an important part to play to scientifically inform a policy making process.
Data collection and analysis can demonstrate the positive or negative impact of a policy and guide the policy design process. Scientists can model possible scenarios and evaluate outcomes. Long-term empirical and theoretical research creates a pool of knowledge useful to propose sustainable and effective decisions. It can also alert against upcoming catastrophes and develop preventive and curative solutions. In a crisis, scientists can lead short-term research that focuses on the specifics of the situation. These different types of research are necessary and complementary.

FSP’s response
FSP’s experts analyze and articulate existing policy with evidence base research to inform possible reforms. FSP considers the agrifood chain as a complex system of interactions between a variety of stakeholders, including, the regulators, input suppliers, farmers, traders, transporters, processors, retailers, and others that link farmers to consumers. FSP addresses transformations that impact the entire agrifood system. FSP’s value-added is the farm, firm, and market information and analysis that feed and undergird both its policy work and its efforts to build policy capacity.