How much injury can a grapevine stand? We may know the answer to this question in the spring of 2016. The last two years have heaped unprecedented levels of injury and stress on the vineyards around Grand Traverse, Michigan. How well the vines get through the winter ahead and the start of growth next spring will be the big concern of growers, and of great interest to those who are considering getting into the wine grape game in northern Michigan.

It all started with a very late harvest in 2013. This allowed for no postharvest recovery period for many varieties. If there is a period of good conditions after harvest, vines are more able to finish maturing their buds and canes, increasing their cold hardiness to the maximum for each particular variety. Riesling and Chardonnay, the mainstay white wine grapes of the Grand Traverse region, can typically tolerate temperatures to about minus 10˚ F before significant injury occurs to buds. The primary red wine grapes in the region, Pinot Noir and Cabernet Franc, can also be expected to come through without a great deal of harm if the minimum temperatures are not below minus 10˚F. The late harvest in 2013 probably reduced the cold hardiness of the vines going into winter, such that minus 10˚ F temperatures would actually lead to significant levels of injury.

In February and March of 2014, Grand Traverse vineyards were challenged by a number of nights with sub-zero temperatures, getting as low as minus 24˚ F on the morning of March 3 in parts of Leelanau and Grand Traverse Counties. A close look at bud conditions in late March revealed a fairly good, 84 percent primary bud survival rate for Riesling, with Chardonnay not far behind at 74 percent. Pinot Gris and Gewurztraminer did not do as well, with just over 50 percent survival of primary buds; Pinot Noir and Cabernet Franc both came in at under 50 percent live primary buds. Some of the worst survival rates were found in the variety Gruner Veltliner (5 percent) and a number of muscat varieties. As was expected, hybrid varieties fared much better, as cold hardiness is one of the characteristics typically selected for in breeding programs. Several hybrid varieties showed greater than 80 percent survival of primary buds.

Unfortunately, bud survival was only part of the story. The extreme cold caused injury to the vascular tissues of the canes and trunks. This sort of injury is harder to assess, and the result of the damage may not be fully expressed for a number of months. At the onset of bud swell and shoot growth in the spring, it became evident that there were sites where very few shoots were progressing due to injured wood. At some sites, vines with predisposing problems such as poor vigor or significant disease issues died outright. As the growing season of 2014 progressed, many shoots that looked alive and well in the spring began to wither and die on injured wood that did not die early in the spring. The eventual crop in 2014 ranged from about 10 percent to 50 percent of an average crop for vinifera vines, and about 80 percent of a crop for most hybrid varieties. Cutting into older wood late in the year revealed many dead areas under the bark. Michigan State University (MSU) Extension recommended removing as much of the old wood as practical at pruning in the spring of 2015, and relying on 1-year-old canes for renewing the fruiting zone.

Nobody thought the winter of 2014-15 could be as bad as the year before, but everybody was wrong. Many sites in the Grand Traverse region were hit with numerous evenings of extremely cold temperatures in February and March. The MSU Enviro-weather system recorded temperatures at minus 15˚ F or lower on six dates from Feb. 15 through March 5 on Old Mission Peninsula in Grand Traverse County, with minus 19.9˚ F as the coldest reading on Feb. 20. East Leland in Leelanau County also recorded six nights below minus 15˚ F, with four of those nights below minus 20˚ F. The Northwest Michigan Horticultural Research Center (NWMHRC) in Leelanau County only reported minus 10˚ F or lower four times, with the lowest temperature at minus 16˚ F on Feb. 20. The minimum low temperatures at East Leland and NWMHRC were even lower than temperatures experienced in early 2014. To make matters worse, there was far less snow cover during the 2015 cold events, so more of the wood and buds of the vines were fully exposed to the cold.

The results were as expected, with vinifera varieties showing high mortality to buds, and there was also clear evidence of injury to the vascular tissues of the canes. Bud survival was worse than the year before. Riesling showed a 61 percent primary bud survival rate; Chardonnay 66 percent; Pinot Noir and Cabernet Franc about 30 percent. The cane injury was localized, occurring just above where the winter snow cover had protected the wood; the tissues several inches above this zone looked much healthier. Just like in 2014, this injury to the wood resulted in some weak vines dying, a lower percentage of bud break than expected from winter bud mortality levels, and shoots that collapsed and died throughout the growing season. The hybrid wine grape varieties fared better, but as with the vinifera, injury was more extensive than in 2014. The worst injury occurred to Aromella (59 percent) and Chambourcin (43 percent). 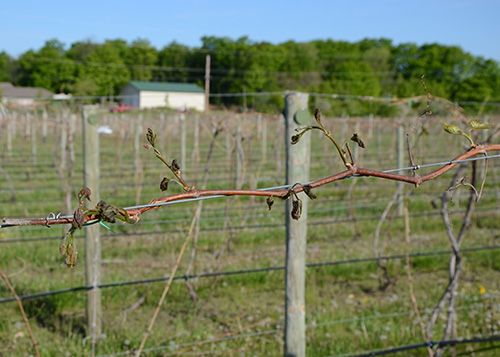 By mid-May there was enough shoot growth that a tentative crop load estimate for the region could be made. Most vinifera varieties still appeared to have the potential for 20-40 percent of a full crop, and most hybrids still had a chance at 60-80 percent. This all changed on the early morning of May 20.

Clear and calm atmospheric conditions produced a severe radiation freeze throughout most of the Grand Traverse region. Temperatures dropped to as low as 22˚ F and stayed there for several hours. By the end of the day, extensive injury to plants was obvious throughout the region. The freeze was particularly devastating to vinifera varieties, because their fruiting zone is typically closer to the ground than hybrid varieties. Every growing shoot was killed in many vineyards. Within a few weeks, many vines pushed out live growth from secondary and tertiary buds, but the potential crop was reduced by about half, and the progression of the growing season had been set back nearly a month.

The winter cold and May freeze made 2015 a far worse year for vine health and crop load than the horrible year of 2014, but Mother Nature was not done with us yet. A violent front of thunderstorms passed through the region on Aug. 2, with winds as high as 90 mph and a lot of large hail. The devastation to area vineyards was stunning, worse than from any summer storm since the development of the wine grape industry in northwest Michigan. Where the wind and hail was the worst, foliage was tattered, nearly all of the remaining fruit was destroyed or severely bruised and shoots were severely scarred. 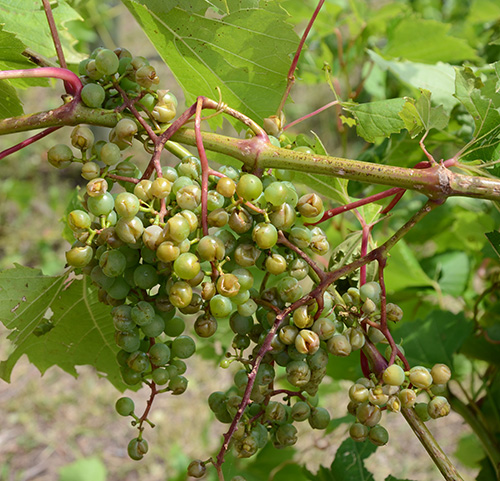 In heavily damaged vineyards, the shoot growth and fruit development during the next two months was slower than expected, even with some very favorable weather. This was probably related to the great loss of older leaves and injury to the vascular tissues of the shoots from hail impacts limiting the ability of vines to photosynthesize and transport carbohydrates to growing points in the canopy. To the north and south of the main storm track, there are some vineyards that look much better and still have a harvestable crop. The next big concerns are the possibilities of poor cold hardiness of buds and canes due to the high stress conditions the vines have experienced. There is also a concern that canes will break at the hail scars when being manipulated during pruning next spring.

Back to the question at the start – how much injury can a grapevine stand? Quite a lot, indeed, but we have seen that many have reached the limit, and there still may be more trouble ahead.