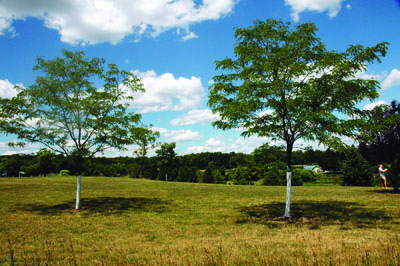 A smart urban or community landscape has a diverse combination of trees. The devastation caused by exotic pests such as Dutch elm disease, chestnut blight and emerald ash borer has taught us the importance of species diversity in our landscapes. Exotic invasive pests can devastate existing trees because many of these species may not have evolved resistance mechanisms in their native environments. In the recent case of emerald ash borer, white ash and green ash were not resistant to the pest and some communities in Michigan lost up to 20 percent of their tree cover. To promote diverse use of trees by homeowners, landscapers and urban foresters, MSU Extension offers a series of tip sheets for smart urban and community tree selection.

In these tip sheets, we suggest trees that should be considered in situations where an ash tree may have been planted in the past. We have limited the tip sheets to medium to large trees that fulfill similar design intent as ashes. We include information on general characteristics, hardiness, mature form, size and other noteworthy qualities. For species native to eastern North America, we provide a map of the species’ native range. We tried to present a representative number of “tried and true” trees and some lesser-known or underused selections suitable for Michigan. Smart tree selection is guided by Right Plant/Right Place and Responsible Use: selecting trees based on a tree’s functional use, aesthetics, adaptability and environmental contributions to the immediate site and surrounding areas. Our tip sheets focus on the species level, although we do mention cultivars of several species. The following trees are recommended and featured in a tip sheet:

* See on tip sheet regarding responsible use of this species.