Distribution: Occurs in all fruit-growing regions in eastern North America, but uncommon. 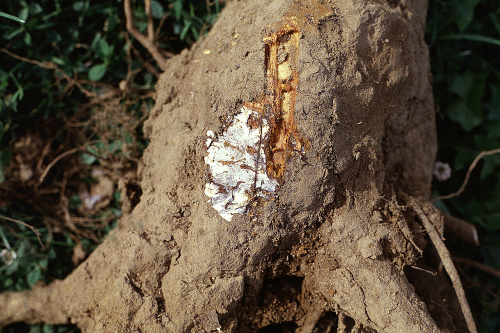 The bark at the crown and roots sloughs off easily, exposing the dense white growth of the fungus (A). The growth extends in a fan-like pattern underneath the bark. Black shoestring-like strands (rhizomorphs) may be obvious on the surface of the bark (B). In the fall, yellow/brown mushrooms may appear at the base of the tree, especially if killed trees are left in place (C). Trees in affected orchards will often die in a circular pattern from one or more foci in the orchard.