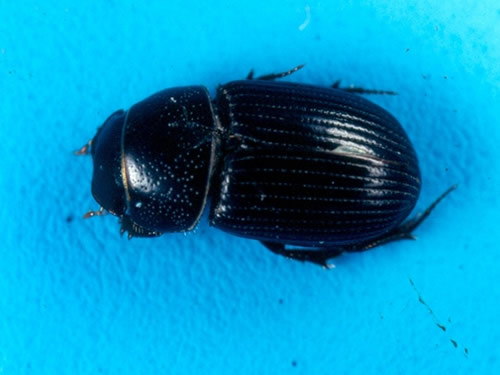 Aphodius beetles are active on golf courses mostly in May, while  Ataenius beetles are active in June. Ataenius and Aphodius beetles are virtually identical to the naked eye and require an expert with a microscope to identify the species (Images A & B). Turf damage from Aphodius grubs occurs in June while damage from Ataenius grubs occurs in July. The adults are small black beetles, 3/16th of an inch long (Image C).  They mate and lay eggs in May and June. Aphodius grubs hatch in June and Ataenius grubs hatch in July. They both feed on turf roots for about one month after egg hatch before pupating and turning into a beetle. The adults hide in the thatch or soil or leave the fairway to overwinter in debris in nearly woodlots. In southern Michigan, we may have a partial second generation of Ataenius with the grubs present in September. However, few grubs are found at that time, and turf damage from the second generation is very rare in Michigan.

Notes: Ataenius and Aphodius are only known to cause turf damage to golf course tees, greens and fairways. Infestations may collapse naturally due to predation and disease.