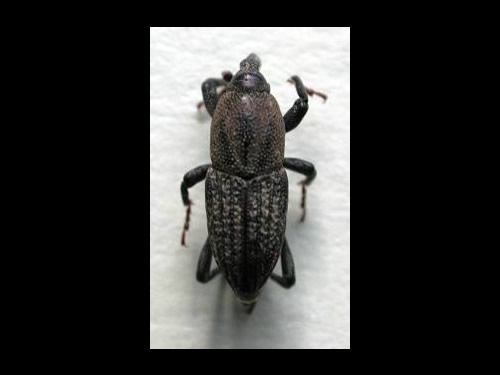 Adult bluegrass billbugs are a small dark gray to black weevil approximately 5/16 of an inch long (Images A & B). Individuals are typically found in small numbers in most lawns. They have a single generation per year with adults becoming active in May. Eggs are deposited inside small holes chewed into the grass stem between late May and early July. Eggs hatch in about 6 days and the larvae feed inside the stems. It is the larval stage that causes the damage. Larvae pupate and adults emerge in August. They find places to hide in the turf and overwinter as adults.

Notes: Damage from this pest is uncommon because of predators and diseases. Regular applications of a synthetic pyrethroid insecticides (such as deltamethrin, cyfluthrin, bifenthrin and lambda-cyhalothrin) after early June have been known to suppress natural enemies and allow billbugs to increase to damaging populations.